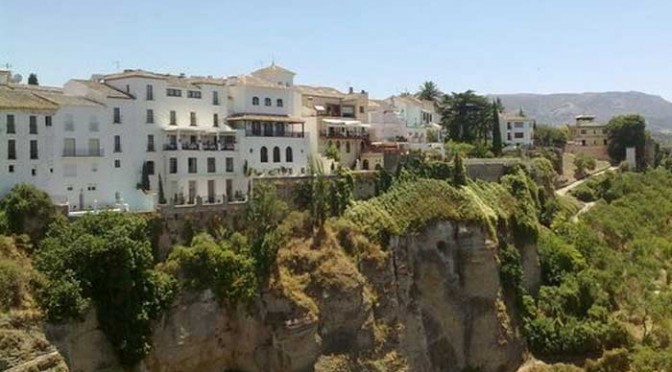 Welcome to Ronda the “city of dreams” in Andalucia! One of Spain’s most visited white towns of Andalucia. Ronda is very compact and easy to navigate whilst walking the cobbled streets  visiting the Real Maestranza bullring, the Puente Nuevo or El Tajo gorge There are many beautiful churches, museums, and wonderful coffee shops and tapas bars.

Want to learn a bit of Spanish on the way? Read some of the text in this article in the Spanish version here….

In Ronda for a day trip?

If you’re only in Ronda for one day be sure to read our Michelle Obama tour of Ronda, but if you’re likely to be here for two days or more, then maybe you could enjoy some of our most popular walks including the walk to the Virgen de la Cabeza, or Mr Henderson’s Railway Walk.

A walking tour of Ronda is a pleasant and enjoyable way to spend a lazy few hours, almost everything you could want to see in Ronda is no more than 200-300 metres from the new bridge. Our handy downloadable printable guide and city map is very useful if you are visiting Ronda for a day trip.

As well as being blessed with some of Spain’s most impressive natural and historic monuments, the accomodation options in Ronda are excellent because many offer views of the Tajo gorge from their windows and balconies plus the stunning views of the mountains surrounding the city.

Ronda the “city of dreams” in Andalucia! is a small city perched on a seemingly precarious platform of rock, it was at one time an impregnable fortress only defeated in battle through trickery, and during the reconquest with modern (for the era) rock blasting cannons.

The population of Ronda is around 34,000 so it is big enough to offer all the essential services of a large town but still small enough to retain it’s authentic charm as one of the white villages (pueblos blancos) of andalucia. At a height of 723m in the Ronda mountains, the city has a cooler year round temperature than the coast, making life in Ronda altogether more agreeable than other Andalucían cities.

Ronda is also the perfect base to explore other cities such as Sevilla, Granada, Córdoba, Jerez de la Frontera, Cadiz, Antequera, or Malaga.

Ronda is the biggest city in northern Malaga province, and the closest city to many of the smaller villages in Cadiz province, making Ronda an ideal base for exploring the Serrania.

Within a few kilometres of Ronda are some of the most visited Pueblos Blancos, the famous white villages of Andalucia, Setenil de las Bodegas, Grazalema, Gaucín, Juzcar, Benalauria, Montejaque, Teba, Cortes de la Frontera, Igualeja, the list goes on…

As well, Ronda is close to three natural parks, the Grazalema natural park, Alcornocales natural park, and the Sierra de las Nieves national park. The Serranía is also home to pre-historic cave paintings at Benaojan, Neolithic dolmens at Montecorto, and of course, the Roman city of Acinipo.

The countryside of the Serranía is described as unique, in fact universally important. Many endemic species make their home here, including the pre ice age Pinsapa pine tree, and numerous orchids only found on our mountains.

The Ronda printable guide and city map. Ronda the “city of dreams” in Andalucia!

We have received many emails from people asking for a printed version of Ronda Today so we have created a 21 page A4 essential guide to Ronda and the Sierras from some of the articles on this website. At just 5 Euros (Paypal) It is well worth the investment if you are planning to visit the “City of Dreams” for a week, a couple of days or just a day. The guide contains Ronda Todays’ most important tourist information articles and includes a map of Ronda, the most popular monuments and nearby places to visit including information on the Sierra de Grazalema and the white villages (Pueblos Blancos).  Just click the link below, pay via Paypal and you will receive an email with a link to download the guide to your computer. It’s a PDF document so you can store it on your machine and print it straight away.