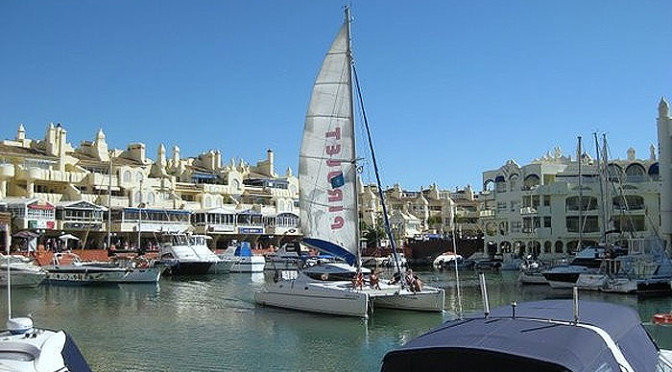 There are many reasons to visit Benalmadena, the beach and world class Arabian styled marina being just two of them. Eating out is a pleasure, the pueblo a delight to see, and the parks a relaxing distraction.

Amongst the best known attractions of Benalmadena is the marina with its village atmosphere, yachts berthed under sun soaked apartments, and the boulevard along which many of Benalmadena’s best restaurants and bars are located.

Either side of the marina are miles of golden sand beaches stretching to Torremolinos in the East, and to Fuengirola in the west. The town is a popular summer holiday destination for Spaniards and foreigners alike, in fact Benalmadena is home to one of the greatest concentrations of foreigners who make up 35% of the city.

Historically the village traces it’s first inhabitants to neolithic people who fished along her shore, and made homes for themselves in sheltered parts of the hills above the coast. A visit to the Archelogical Museum will shed light on stone age cave paintings, Phoenician trading, Roman ruins, and the Islamic port town that existed until 1485.

Benalmadena’s favourite son was an Islamic era scientist and botanist, Ibn al Baitar, whose statue can be seen on the boardwalk nect to Bil Bil castle.

The church of Santo Domingo across from the railway station sits on the location of the former Moorish castle of Ben-al-Madina, the former name of the town which means children of the mines, a reference to the iron ore and ochre mines of the area.

Being a coastal city which is close to Malaga and the international airport, you’d expect Benalmadena to be a popular tourist destination, and this explains the huge number of leisure activities situated on the city’s doorstep, including Selwo Marina, Sea Life Aquarium, Tivoli Park, Paloma Park, Benalmadena Golf, Butterfly Park, the Torrequebrada Casino, the Cactus and Succulents Garden, the mountain cable car, as well as the many hiking trails in the mountains above the town.

Watersports are popular, yachting being the most obvious, and within the marina complex tickets can be bought for dolphin and whale watching excursions. The beaches around Benalmadena are also popular for wind-surfing and kite-surfing, whilst the boulevard itself is a mecca for casual cyclists and roller-bladers.

Getting to Benalmadena isn’t difficult. From Malaga’s international airport simply use the suburban train going west toward Fuengirola, or head west on the E-15 after picking up your hire car.

Daytrips to Benalmadena from Ronda are just as easy, use the train from Ronda to Malaga’s Mario Zambrano station, then change to the suburban.