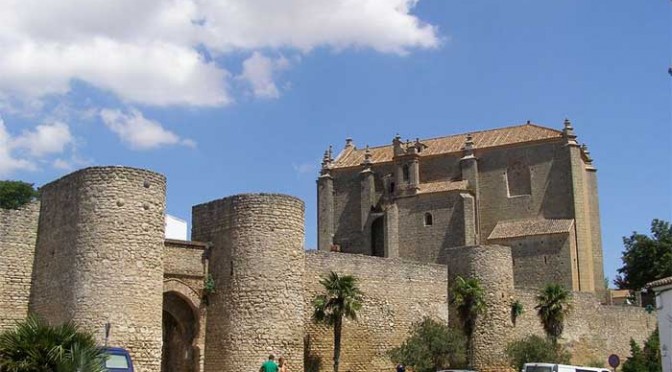 If you don’t mind a short walk of ten minutes after leaving the Puente Nuevo, just keep walking all along that same street, known as Calle Armiñan, for about a 700m. At the bottom of the hill you will find the old wall that used to protect Ronda from attack. Within the wall are two gates that were the main entrance to Ronda during Moorish times.

The two gates are the Almocabar Gate (pictured) and the Carlos V Gate. It was through these very gates that Ferdinand and Isabel first entered Ronda on their Triumphal march into Ronda La Ciudad Soñada after the reconquest. During Napoleon’s invasion of Spain and Portugal (Peninsular War 1808-1814) much of Ronda’s fortifications were destroyed. The Almocabar gate itself was left in ruins, and was not restored to its current look until after the Spanish civil war.

The area adjacent to the Almocabar gate is the Barrio San Francisco. There is a plaza that used to be the cemetery before the reconquest. This same plaza also contains a very attractive memorial erected a few years ago to commemorate the 500th anniversary of the church Espiritu Santo (seen behind Almocabar in our photo) being built. There are also plenty of bars and restaurants here as well a a childrens play park. On weekends and holidays these bars get quite busy so if you want to get a good spot on a terrace for enjoying the views and people watching then get there well before 2pm.