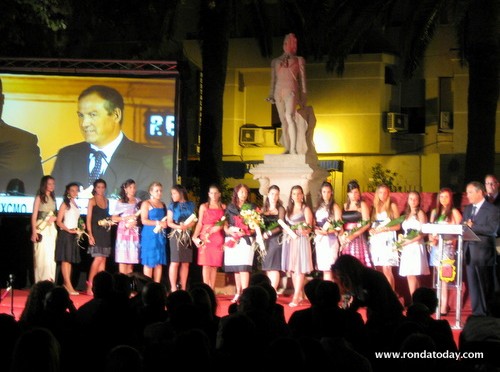 Since the inception of the Corrida Goyesca in Ronda’s September fair in 1954, the ladies of Ronda have been the official representatives of the city, and welcoming committee for visiting dignitaries.

So exceptionally popular have been the Dames Goyesca, that in 2009, a bronze statue of a Goyesca lady was inaugurated in Alameda park, directly across from the statue of Pedro Romero, Ronda’s most famous bullfighter.

Every year a president of the Dames Goyesca is chosen, usually she is a woman well respected in Ronda, someone who has earned the affection of the people of Ronda, and who is held up as a model of womanhood for others to emulate.

At the same time, fourteen younger Rondeñas are picked to support the president in her duties, typically the younger Dames Goyesca will be in their teens, and of course chosen for their beauty, as well as their grace.

Every year in Ronda several of the town’s ladies are chosen to be the Dames Goyescas, and represent the ladies seen in some of Francisco de Goya’s paintings of bullfighting and pageantry from the late 18th century. Many of Goya’s paintings were in fact commissioned by a tapestry workshop in Madrid, the aim being to print the paintings on fabric.

Some art historians argue Goya’s paintings of the Duchess of Alba are the inspiration for the gowns worn by the Dames Goyesca, and to a lesser extent this might be true, in that many of the simpler gowns worn by the Dames Goyesca are very reminiscent. The more complex designs however have been developed in the 20th century in response to perceived fashions of the 18th century, and as such are even more stunning and beautiful than they would have been.