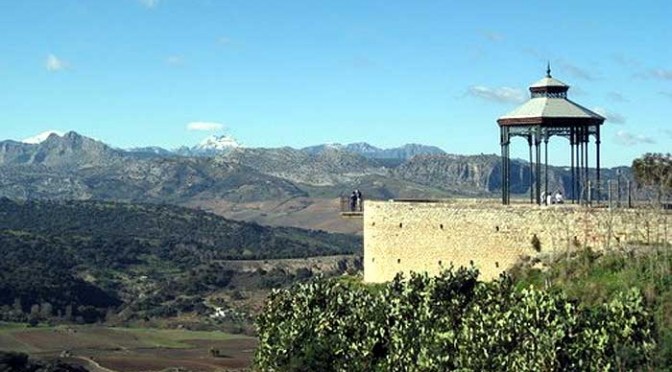 Stretching from the Parador Hotel, around to Park Blas Infante, and along Paseo Hemingway there are some of the most impressive views in Ronda. The Alameda Park and El Balcon del Tajo changes to  the Paseo de los ingleses which takes you towards the bullring and Parador.

Far down below, actually as much as 200 metres at its deepest point,  lies the valley that in Moorish times was the wheat growing heart of Ronda, from which farmers and their laborers would collect the wheat grains and transport them to the mills that used to line the edge of the cliffs under Ronda’s hanging houses.

From the Alameda Park and El Balcon del Tajo, on the far side of the valley you’ll see the Virgen de la Cabeza cave church, and  further you can make out the Cueva de Pileta, and beyond that the mountains that stretch from Montejaque to Juzcar. And further away in the distance you have the beautiful mountains of the Sierra de Grazalema.

The most impressive views of the valley and tajo gorge are from the platform next to the open air theater close to Ronda’s Plaza de Toros, with an amusing name (the Spanish replace “tajo” with “coño”) el Balcon del Coño. Unfortunately the name isn’t translatable without causing some offense (its a part of a ladies intimate anatomy.) But, if you imagine a person arriving at the balcony, looking down 150m and exclaiming “Ayy, coño!” and then stepping back rather quickly you might understand its meaning.

The park area and gardens.

Whilst Ronda doesn’t have a botanic garden, there are several specimens of Pine, Acacia, and Himalayan Cedar that are listed on the notable trees of Malaga province for being more than 200 years old. The park is exceptionally popular with Rondeños and visitors alike for it’s formal paths, fountains, duck pond, and bird enclosure and a childrens playground. There are also public toilets by the childrens park but you do have to pay to use them.

At the front entrance of the park as you enter from Virgen de la Paz you’ll see a statue of the founder of Ronda bullfighting Pedro Romero, and close by a statue honoring the many women of Ronda who have supported the Corrida Goyesca in costume, the Damas Goyesca.

Who was Blas Infante?

Blas Infante is considered the father of Andalucian autonomy, and it was in Ronda that he made his declaration that Andalucia is a nation within the Kingdom of Spain, so be sure to read the plaque at the base of his likeness as you walk to the Balcon del Tajo.