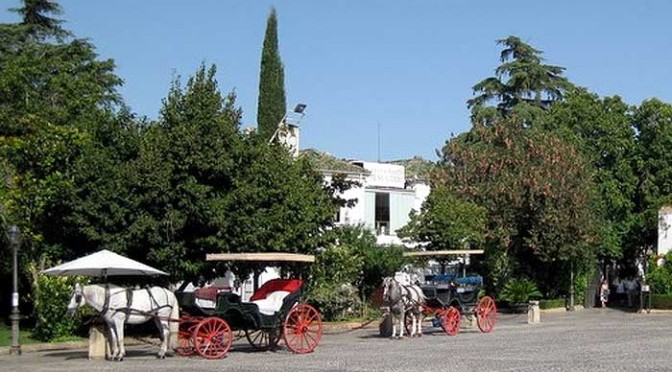 In 2010, Michelle Obama, the wife of President Barrack Obama, and First Lady of the United States visited Ronda as part of a 5 day holiday in Spain, and Ronda Today is proud to provide her complete itinerary.

Arriving in Ronda, Mrs Obama first enjoyed a leisurely stroll around the Casco Antiguo, Ronda’s old Moorish city, where she visited the Casa Don Bosco and admired their view of the Puente Nuevo, Ronda’s most iconic monument.

From there she walked to Plaza Maria Auxiliadora to admire the Pinsapo trees (Abies Pinsapo) in the plaza, these are ancient pine trees that have survived in the Serranía de Ronda since before the last ice age, and are unique to our district of Spain. The tree is now protected, and is once again thriving on our mountains.

Continuing through the old cobbled streets of Ronda, Michelle and Sasha, along with several friends of the family were shown the Palacio Mondragon, the medieval palace of the Moorish kings and governors of Ronda, and which is now the municipal museum tracing the history of human settlement of the Serranía from paleolithic times to the present.

Ronda’s Santa Maria la Mayor church drew them onwards where the church priest gave them a personal tour. It is from Santa Maria that most of the Semana Santa processions depart or arrive, as well as the Romería and other religious events that happen through the year. Michelle was by all accounts quite overwhelmed by the beauty of the church, especially the gilt silver altar and chandelier hanging above.

The family’s next stop were the Forestier Gardens and Water Mine adjacent to the Casa del Rey Moro. It was here that Michelle was particularly impressed with views of the El Tajo gorge, and the hanging houses deceptively clinging to the edge of a steep cliff. Mrs Obama was overheard exclaiming at how ‘magnificent’ Ronda is whilst here.

However we believe the highlight of her day may have been descending the Water Mine where in medieval times bags of water were passed from the bottom to the top to provide the city inhabitants with drinking water since Ronda is too high above the river and the ancient Roman aqueduct had long since been destroyed.

After leaving the Casa del Rey Moro, Mrs Obama and her entourage made their way to one of the city’s most exclusive restaurants, del Escudero, which is right next to the Plaza de Toros, where she enjoyed Langoustine Lasagna and Goat’s Cheese Salad.

The final stop of the day was Ronda’s famous bullring, the Plaza de Toros, widely considered to be the oldest bullring in the world, though definitely the most important as being the home of the Ronda style, which is one of two styles of bullfighting, and is without horseback.

At this point the Obama party raced back to Marbella for another function, but we’re sure you’ll agree with such an active day and so little time in Ronda, Mrs Obama must have missed a great deal, which is why most travel agents recommend at least two days in Ronda, and as much as a week if you also plan to see Andalucía’s white villages and other historically important monuments such as the Cueva de la Pileta, Acinipo ruined Roman city, the Grazalema Natural Park, and the pristine Genal Valley.