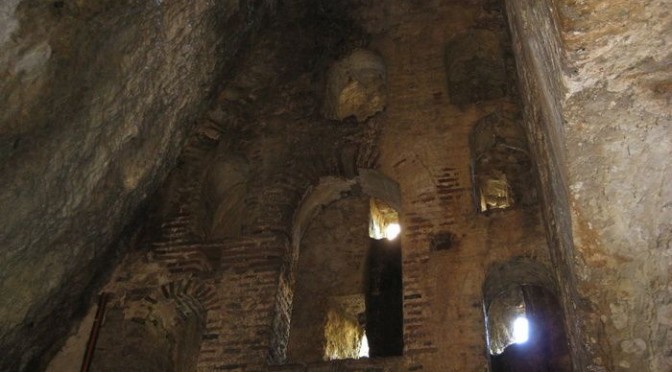 In popular culture, the mine is rumoured to be the secret hiding place of Abomelic’s gold, and many people in Ronda still believe that underground chambers and treasure may still be discovered. This is unlikely however, and many of the rumours could have been started by slaves freed after the city fell to the Catholic monarchs Ferdinand and Isabella in 1485.

Within the mine there are 231 steps carved into the rock that lead to the river below, a total distance of 60 metres, and the bottom 30 metres contain an impregnable fortress from which the city defence could protect essential water supplies.

The fortress is a marvel of medieval Islamic engineering, and unique in all of Spain. The chambers were built using a complex latticework of stacked vaults that made it possible to defend the lowest chamber and the entrance from chambers higher up the fortress.

At one time it wasn’t necessary to leave the fortress to collect water, a water wheel with buckets was used to bring water from a well in the room of the spring  (‘Sala del Manantial’), and then slaves would form a human chain to pass water in skin bags called zagues from the bottom to the city above.

The fortress at the bottom of the water mine was also thought to be a secret escape from the city because the location of the fortress cannot be seen from the Arab Bridge which was the main entrance to the city. However, to make sure the city was defended, the weapons room included a small window above the door, that could be used to pour boiling water onto attackers.

Another interesting aspect of the fortress is that the stone walls prevent sound traveling, and in the room of secrets it is said that if a person stands in the centre of the room, he cannot hear what is said in the corner.

Directly above the fortress, about 25 metres above the river, there is a terrace known as the Terrace of the Conquest, from which Moorish and then Christian conquerers could watch the river for signs of attack, and this is now known to have been the first line of defence of the water mine. It is below the hermit’s grotto, and is so well hidden it cannot be seen from any direction.