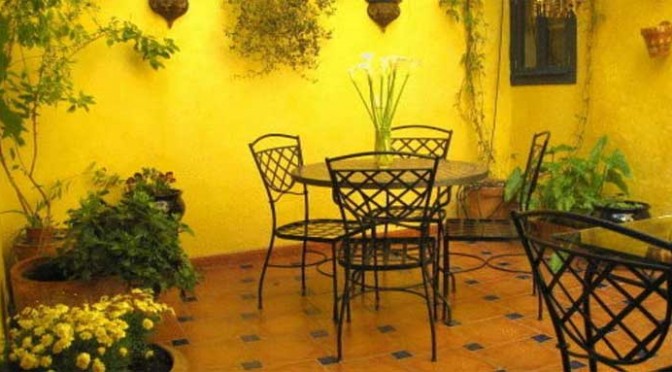 Imagine a quiet haven away from the crowds, in the heart of Ronda’s Moorish quarter, a house that one could easily believe was once owned by a wealthy Moorish trader, and now your home away from home, in Ronda, Andalusia.

Baraka B&B is this place; a unique bespoke hotel in Ronda, with just three rooms, situated in a quiet pedestrian alleyway. The internal patio is the centrepiece of the entire house, the stars forming the ceiling. A central staircase winds it’s way to the roof, where a sun drenched terrace awaits, offering views of the hills surrounding Ronda.

Each of the rooms are individually decorated; Safra, the yellow room with mudejar ceiling; Warda, the rose room with quaint Arabic decorations; Salama, the room of tranquility. Baraka B&B is decorated in a style reminiscent of the Arabic world from which the hotel is named.

Picture yourself waking from a good night’s sleep, and the smell of fresh Arabic coffee wafting through the house, the birds singing in the trees of the garden across the street, far away from home yet undeniably at home as well. Oh, if only you could stay forever.

After a leisurely breakfast, wander the streets of Ronda as the tiendas and cafés open their doors; the air has a fresh kiss and feels wonderful, the noises of a market town waking up. Do you see why we call Ronda the city of dreams, La Ciudad Soñada?

Baraka B&B is just a short walk to the Casa del Rey Moro, Forestier’s Gardens, and Ronda’s Water Mine. A little further and you’re standing on Calle Armiñan, the main thoroughfare of the old quarter. The Puente Nuevo isn’t far either, and offers a magnificent spot for watching the sun rise over the roofs of Ronda’s hanging houses.