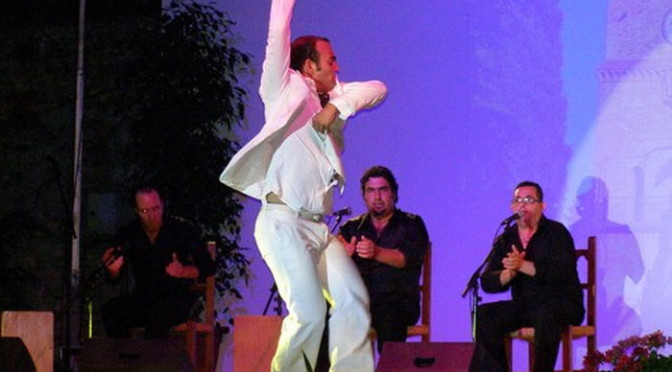 Where to see Flamenco live in Ronda?

If you want to see flamenco live then there are a few options in Ronda. Fast  becoming an incredibly popular Flamenco show attraction is Bar El Quinque located close to the Ronda Tourist office and bullring… They have two shows every day.

Located on the Plaza Socorro behind the statue of Hercules and the two lions. The Casino runs flamenco shows with guitar, song and dance on Tuesdays, Thursdays and Saturdays starting at 8.30 pm and for a price of 15 euros for adults and 10 euros for children 6 to 12.

On Wednesdays and Fridays the same company run shows in the Lara museum. (prices same as above)

No trip to Ronda would be complete without hearing at least a small amount of Flamenco guitar. But to visit one of Celias concerts is an absolute treat. She is one of the most talented flamenco guitarist I have ever heard and she can be seen playing at Calle Calvo Asensio, 8. (RONDA) at 6pm and 7.30pm most nights. The concerts last for 1 hour. Read More about Celia and her concerts here…

Located halfway between the Bullring and the Church Nuestra Señora de la Merced, RONDA GUITAR HOUSE is a unique space dedicated to Spanish music and in particular the Spanish guitar. The resident guitarist Pacoseco performs two concerts each evening presenting the Spanish guitar in both classical and flamenco styles. Read More about the Ronda Guitar house here…

A bit of history about Flamenco in Ronda.

In the 21st century, Flamenco performers have borrowed a lot of style, tempo, and beat from other more modern forms of music, yet is still essentially recognisable as Flamenco. Traditional flamenco performers tend to be known as “puro”, in contrast to modern “fusion” performers.

Flamenco has a lot more diversity than the average music lover will ever discover, Flamenco is more than just Sevillanas, Buleria and Rumba.

The musical structure of flamenco music is called “palo” and there are more than 100. Ronda has had a small part to play in the development of some palos for example the Rondeña, a variation of the Fandango, is believed to originate in our fair city from pre-Moorish musical styles. At least two other palos are recognised as being from Ronda, the Polo, and the Caña.

Every August is a great time for aficionados of Flamenco to visit Ronda when the city hosts the oldest and most anticipated festival of the Flamenco calendar, the Cante Grande de Ronda.

Of course you don’t have to visit Ronda in August to experience a wonderful sampling of Andalucian Flamenco. The Lara Museum also hosts a Flamenco show three nights a week from March to November on Wednesday, Thursday, and Friday at 10pm (September, October, and November the show starts at 9:30pm). The show includes dinner and drinks and to reserve your places make sure you talk to your Ronda hotel receptionist or the Ronda tourist office, or book at the Lara Museum ticket office.

Ana Amaya Molino
Ana la Gitana (1855 – 1933) was Flamenco music’s darling of the late 19th and early 20th centuries, performing throughout Andalucia until her death. Ana was born into a poor gypsy family but her voice and guitar became her signature throughout Spain.

Diego del Gastor
Diego Amaya Flores (1908 – 1973) is perhaps one of the most significant guitar players of the Serrania de Ronda. Born in Arriate and raised in El Gastor, Diego Amaya Flores was a real gentleman (“caballero”), persona humilde and a genius as an artist. He lived in Moron de la Frontera.

Not wanting to be famous, Diego disliked the “fiestas gitanas de los señoritos” and preferred to avoid them. With his guitar he was known to play classical works by Tarrega, Rodrigo, Chopin, Beethoven, and he knew Machado, Béquer, Lorca, Miguel Hernandez, but above all he played flamenco from his heart.

In an interview published in the Diario Sol de España (16/6/1971) he tells that he got his first guitar lesson from Pepe, his brother and after that he completed studying in Moron with Pepe Naranjo. He loved the guitar from an early age. His parents told him he was playing on a stick as if playing the guitar when he was only 2 years old and fell asleep that way. He didn’t like to play at organised festivals, he preferred to play when and where he liked it, as spontaneously as possible.

Alendrina de los Remedios Flores
Remedios Flores (1952 – current) is a world renowned Flamenco singer from Ronda who had international success with her husband Rodrigo, himself a recognised master of Flamenco guitar. In 1991 the couple were declared winners of Billboard Magazine’s Song Contest Latin category for “Nos Volvemos a Querer”. Their biggest selling album “Flamenco Caravan” was re-released in 1998 and is one of the highest selling Flamenco albums of all time in the International market.