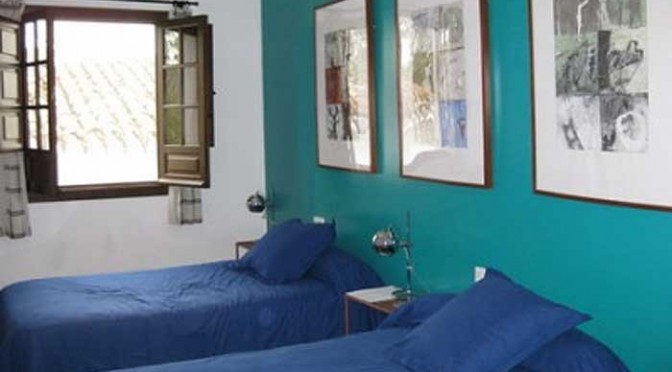 Finding a hotel in Ronda is easy, there are so many to choose from, but not all hotels are created equal. Hotel Ronda located next to the Casa del Rey Moro (The Moorish King’s House) is one of these delightful little hotels most people only hear about after their holiday in Ronda.

Quite simply, most hotel booking and review websites or travel guides mention the biggest hotels, or best advertisers and it can be very difficult to find the smaller hotels that you should probably stay at, or would if a friend recommended it. Hotel Ronda is one of these small boutique hotels that really deserves a mention.

Book this hotel in the Moorish Quarter of Ronda

Nieves, the lady who owns the hotel is also the person who does everything, she’s the lady who greets you on arrival, in fact Nieves is proud that her little hotel is so cosy. Guests who stay here agree and happily ask to sign her guest book.

With just five rooms, you can be sure Hotel Ronda isn’t going to be crowded, and each room is spacious with reverse cycle air conditioning, a television, decent sized bathroom with modern shower, and every room includes a wardrobe.

Many of the best Ronda restaurants are also very close by, and being in the old Moorish quarter of Ronda, it’s a quicker walk to restaurants such as El Predicatorio, Almocabar, Duquesa de Parcent, La Pilastra, or Alminar than being in the new part of Ronda. In addition, the hotel and the street it’s in are charming examples what people expect to see in an Andalusian pueblo.

Nieves also proudly states that Hotel Ronda is gay friendly, has free Internet, and is convenient for Ronda cycling, you can even bring your bicycle into your room. In fact Hotel Ronda was chosen by Bjorn Heidenstrom when he recently visited Ronda on his cycling trip from Norway to Cape Town because he was able to bring his bike and trailer into his room for safe keeping. Read our coverage of Bjorn Heidenstrom in Ronda to learn more.

One thought on “Hotel Ronda in Ronda’s Moorish Quarter *”