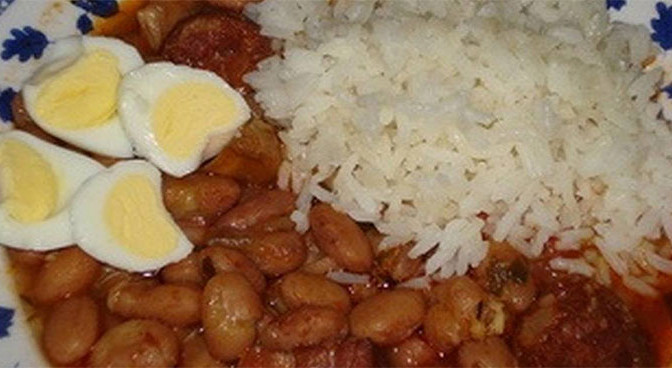 Here’s a nice little vegetarian dish with a hint of spice and more than a whiff of history to it. Let’s get the ingredients together, then we’ll have the history lesson!

If bought in their dried state, the black beans will need to be left to soak overnight. Fill a pan with water, quarter the onion and throw it in. Chop up the carrot and drop that in, too. Do the same with the stick of celery. Add a bay leaf, crush the garlic and put it in. When the water comes to the boil, skim off the froth, turn down the heat, cover the pan and let the beans simmer. It will take about an hour for them to turn soft.

In the year 711 AD (1,300 years ago), Arabic armies poured into Spain from the south, where the crossing from Africa is very narrow. It did not take them long to conquer the whole Iberian peninsula, as far north as the French border. The “Moros” (so-called because they hailed from Morocco) were dark-skinned Muslims and they quickly converted Spain into an Islamic land. In fact, rather than a united country, Moorish Spain was a patchwork of little local kingdoms.

By the eleventh century AD, the Christians had made up their minds to fight back. Starting in the north, and re-conquering Spain virtually village by village, the Christians gradually pushed their way south. It took them 400 years! If you’ve ever wondered why towns like Jerez and Arcos have “de la frontera” tacked onto their names, it is because at some point, probably in the 13th century, they were on the front line between the Christians and the Moors.

Finally, in the year 1492, Granada city, the last Arabic stronghold in Spain fell to the Christians. Spain was once more united under a Christian monarch. Even today there are plenty of villages (mostly over Alicante way) who celebrate an annual festival of “Moros y Cristianos”, to commemorate the freeing of Spain from its 700-year bondage to Islam. The locals dress up in medieval costume and indulge in a riotous free-for-all punch-up.

The dish we’re preparing today gets its name from the contrast in colours between the black beans (“moros”) and the white rice (“cristianos”). Perhaps not very politically correct, but there you have it, that’s history for you.

Back to the recipe. While the beans are simmering, we make a mixture of the oil, salt, pepper, paprika and cayenne, then add this to the beans, finishing off with the juice of the fresh orange. Once the beans are tender, turn off the heat and let the whole lot stand for fifteen minutes.

Now boil the rice with just a dash of salt and the bay leaf. Prepare a bowl for each person, smeared inside with butter, and when the rice is ready, stuff it into the bowls (which can now stand for a few minutes).

To serve, give each of your diners a generous ladling of black beans, then overturn a bowl of rice onto each plate, making a mound of conquering “cristianos” over each plate of “moros”. Garnish with slices of onion and orange, chopped parsley and if you feel so inclined, some diced hard-boiled egg.