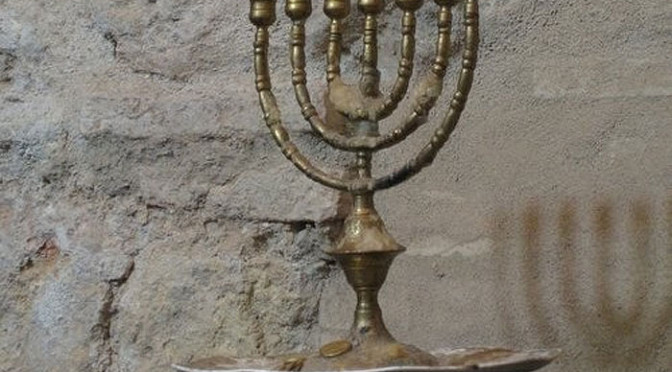 The only surviving pre-expulsion synagogue in Andalucia, and only of only three in all of Spain, the “Sinagoga de Córdoba” has a special place in the history of Jews, it was in Cordoba that the Jews reached their greatest level of influence and from where some of their greatest minds of the medieval era lived and worked.

Built in 1315 (5075 in the Jewish calendar), the temple replaced others destroyed in various pogroms after the fall of the Cordoba caliphate and during the time of the brutal Almohad and Almoravid reigns of Al-Andalus. The Jewish Quarter of Cordoba at this time was to all intents and purposes an independent city within the walls of Cordoba, even to the extent of being walled off.

Look for hotels in Cordoba here…

The synagogue itself was designed by local architect Ishap (Isaac) Moheb and built in the Mudejar style popular in the time, and contains an entrance courtyard from which one enters a small hallway, and beyond which is the prayer room. A stairway in the eastern side of the hallway leads upstairs to the women’s gallery.

Within the prayer room the Eastern wall contains an alcove for the Shabbat candle holder, and to the right (left of the candle) is an inscription that translated into English reads “Provisional sanctuary and abode for the Testimony completed by Yishaq Moheb, son of Mr Efraim Wadawa, in the year 75. So return, Oh God hasten to return to Jerusalem”

Another inscription must have also existed on the opposite side of the alcove, but sadly this has long since been destroyed. Around the outside of the alcove there is an inscription which from right to top and then left reads “I will worship toward thy holy temple, and praise thy name: For loving kindness and for thy truth, for thou hast maginified thy word above all thy name. One thing have I desired of the Lord, that will I seek after; That may dwell in the house of the Lord all the days of my life, to behold the beauty of the Lord, and to enquire in his temple.”

Jews were expelled from Spain in 1492, the same year the Kingdom of Granada surrendered to Ferdinand and Isabella, during a period in which the ascendancy of the Catholic Church and dogma was renewed with vigour. The synagogue was closed, and Hebrew frescoes on the walls plastered over.

From that time until the 1880s the building was used first as a hospital, and then in 1588 was bought by the shoemakers guild of Cordoba and dedicated to their patron saints St Crispin and St Crispiniano. During the 19th century the original panelled roof was replaced with a barrel vault and new plasterwork, but in 1884 a wall partially collapsed exposing the original Hebrew frescoes again, leading to the discovery by Don Mariano Parraga, a Catholic priest, of the building’s original purpose.

The synagogue was declared a national monument in 1885 and restoration started, wih further work done in 1929 by Felix Hernandez, and in 1977 for the 850th anniversay of the bith in Cordoba of Maimonides, one of the most important Jewish scholars ever to have lived, in whose honour a statue was commissioned which now sits in the plaza in front of the synagogue.

Aside from the Synagogue which is open to the public, Cordoba is also home to a small but comprehensive museum and library decicated to the Jewish past of city in the Casa de Sefarad

Look for hotels in Cordoba here…