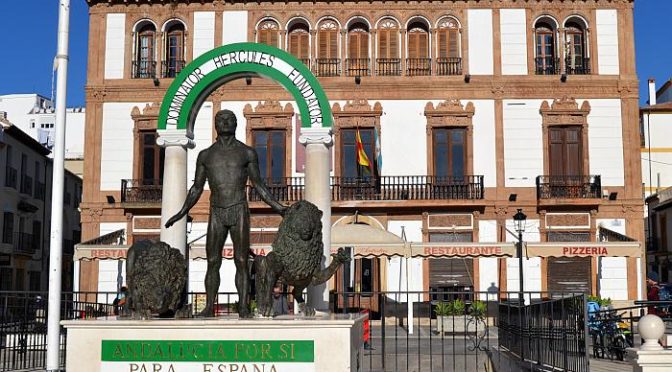 The answer lies in Andalusian nationalism and one of the most important events in recent Andalusian political history, the Assembly of Ronda in 1918 when the father of Andalusian nationalism, Blas Infante, unfurled the flag and symbols of Andalusia whilst standing on the first floor balcony of the ‘Circulo de Artistas’; the building directly behind the fountain with red CA lettering above the windows.

Andalusians are justifiably proud of their history and heritage, and the establishment of a national movement was widely applauded in the early 20th century, eventually leading to Andalusia being recognised as one of Spain’s national communities, and allowing the Andalusian parliament a lot more autonomy than most regions of Spain.

Whilst it may not be immediately obvious, the statue by the fountain is Hercules, with the pillars of Hercules behind him. He is holding onto two lions that he aims to tame, though taming two lions was never one of the tasks set for Hercules. Blas Infante designed the coat of arms, flag, and symbols of Andalusia, so it is probable the lions have another significance unique to Infante’s ideal of Andalusia.

To fully appreciate the significance of Hercule’s fountain and the history of the plaza, step back a bit and imagine the plaza full of cheering folk looking hopefully up as Blas Infante, a hero in his day presented the symbols to the movers and shakers of early 20th century Andalusia, and joyful Rondeños.

Then take a walk past the bullring to the lookout over the tajo, and there you’ll see a life size statue of Infante himself. Sadly Blas Infante’s success in Andalusia made him a target during the civil war, and when Sevilla fell to Franco’s forces, he and his compatriots were rounded up, driven into the countryside and summarily executed, dealing a terrible blow to Andalusian autonomy.

When Spain regained her democratic foundations in the late 1970s Andalusia missed out on full autonomy until 1.5 million Andalusians took to the streets to demand that the Andalusian nation be treated the same as Catalonia, the Basque Country, and Galicia.

A statue, a fountain, and a balcony in Ronda are still regarded as amongst the most important symbols of Andalusian patrimony.