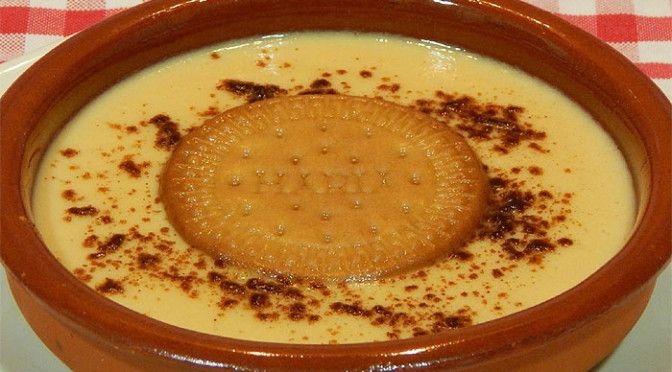 To say that natillas is custard is rather like saying that champagne is only wine. This dessert has a fresh delicacy and a charm which makes good old English custard seem dull and heavy in comparison. Nothing completes a delightful family meal on a summer afternoon than a “pudding” of natillas!

Place the milk in a saucepan, add the cinnamon, vanilla and lemon peel, and bring slowly to the boil. Once it reaches that point, take it off the heat and let it cool a little before you strain off the peel.

Fold the egg yolks and sugar together and place the mixture in the top section of a double-boiler (also known as a “bain-marie”). Hold back a tiny amount of the milk (three or four tablespoons). Whip up the yolks as you add the warm milk.

Using the held-back milk, dissolve the cornflour and then work this into the larger mixture. Heat this custard mix over boiling water for about ten minutes, stirring constantly, until the custard has thickened up. When it has reached the consistency you desire, take it off the heat.

Place one of the ladyfinger biscuits in each of four dessert bowls. Pour the custard evenly over each, and then place the bowls in the fridge to cool.

Whisk the two egg-whites until the liquid is quite stiff. Stir in the sugar, a pinch of salt and some lemon juice.

Butter an oven tin, and put the meringue in, creating four separate portions. Dust them lightly with cinnamon, and give the lot ten minutes in a medium oven, taking the tin out when the meringues have started to turn golden.

Cut the heat, and let the meringues cool to room temperature inside the oven before placing them on top of the four custard portions.