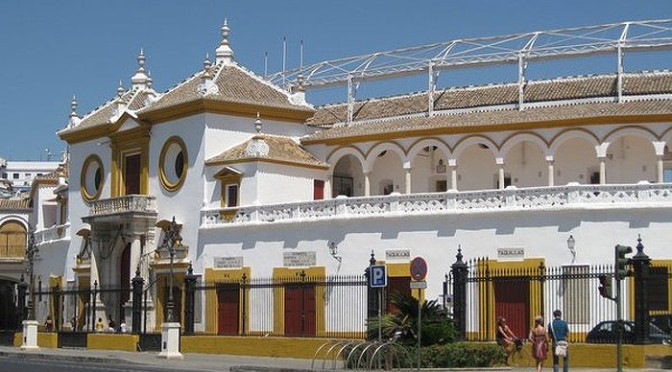 Bullfighting has a proud history and tradition in Andalucia, and no more so than in Sevillawhere the Plaza de Toros is still used to this day. Owned by the Real Maestranza de Caballeria de Sevilla, the plaza competes with Ronda for the title of oldest bullring in Spain.

Unusually, Sevilla’s Plaza de Toros isn’t a perfect circle as is more common, with the rueda actually being more oval in shape. MAny visitors don’t notice this at ground level, but the shape is clearly seen from above, for example by climbing the Giralda tower in the cathedral.

Within the enclosure is housed the Real Maestranza, a chivalric order created originally as a military cavalry, the museum dedicated to bulfighting, and a chapel used by the toreros to pray before entering and leaving the ring.

During the April feria in Sevilla is when the most popular fights of the calendar are seen, with tickets sometimes selling for many hundreds of Euros.