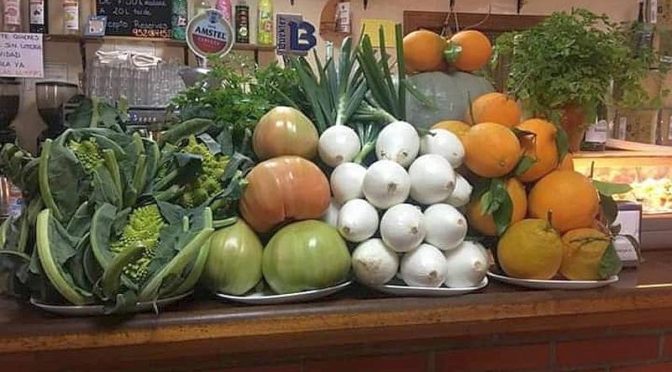 A “venta” is a road side cafeteria, bar and restaurant and you should look out for them on the larger country roads between towns and villages. Visiting a venta in Spain is an excellent way to see and sample the local, traditional gastronomy and way of life in Spain. These Ventas in Spain almost always have a friendly, family atmosphere and some even have hostel or hotel type accomodation.

The simplest ventas consist of a bar and tables in one room. The larger ones have a separate dining room away from the noise of the bar and perhaps an outdoor terrace. Often on display is a selection of local produce and crafts to admire and, of course, to buy.

Non smoking laws are enforced in Spain in public areas. Smoking is not allowed inside and the owner of the establishment will be fined if people are caught breaking this law.

An excellent example of a traditional venta (in Andalucia) is “Venta El Tropezon“. Situated on the main road between Ronda and Arcos de la Frontera, at the junction to a village named Montecorto. The word “tropezon” describes a nice, unexpected surprise. For example, if you trip over but on the floor you find a coin or something else valuable.

El Tropezon consists of a bar (no waiter service, order at the bar) adorned with local seasonal fruit and a selection of food (tapas) on display. This room also houses the obligatory television, fruit (gambling) machine and cigarette vending machine.

There is a small shop to the side selling a wide array of local produce. This includes honey, wine, oil, marmalades, cheese, beans, grains, bread, walking canes, and leather goods. And many more cured hams.

Swing doors lead to the large dining room where there is full waiter service. The walls and pillars are beautifully decorated with old tools of the land, many plants and a myriad of bottles of wine from all over Spain.

El Tropezon opens at 7:00am so people can come for breakfast on their way to work. Closing time is around 7:00pm (depending on the evening trade.) In summer this might be extended. But generally this venta is not open for evening meals.

Coffee and breakfast is served throughout the morning. The morning “rush hour” is 9:50am – 10.50am. At this time workers in the area take a break and come to the venta. Therefore, it is not the best moment for a relaxed drink! With the coffee grinder whirring and the milk steamer blasting, the television burbling and fruit machine chiming, it is no quiet affair! Interesting, yes. Quiet, no.

For your first time in a breakfasting in a venta aim for a little before or after the morning rush, unless you are feeling brave of heart or are hard of hearing! :)

A large selection of breakfast is available.

A traditional breakfast is toast and coffee (Tostada y Cafe). The bread may be a long crusty loaf cut in half, a large round loaf sliced thickly or a thin type of roll called a mollete. The traditional toast topping is a liberal pouring of olive oil and a sprinkle of salt. This may be enhanced with raw garlic and/or pureed tomato. Butter and marmalade are offered in tourist areas. Technically they are actually margarine and strawberry jelly, but it is close!

At lunchtime a selection of tapas and small meals in the bar room are very popular. This is the only bar I know where you have to place the order at the bar and also collect it from the bar yourself; most bars and restaurants have waiter service take your orders and deliver the food to your table.

The midday meal in Spain is normally at 2:00pm. For the workers it can be a rushed matter as they want to get back to work.

Lunch for families on the other hand is extended, allowing for lots of chatter. Sunday lunch is the busiest time in the dining room. Many families dress smartly and head to this their favorite venta for a meal and a relaxing Sunday afternoon.

Snacking, tapas and half rations

If you are looking for light snacks try a range of tapas or a medio ración (half portion).

Tapas are small (saucer size) portions of food that can be enjoyed as a light snack throughout the day, handy as an aperitif while you decipher the menu :) A refrigerated display cabinet on the bar in most places makes it easy for you to point out your preferences. Look on the menu for a list of hot tapas available.

Tapas are said to have originated in Seville as a small plate covering a drink to prevent flies from entering, beginning with simply bread and perhaps Jamon Serrano, then growing into more adventurous concoctions! Some places get carried away and the tapas are more like a medio racción! (half portion)

Olives may be offered free with a glass of beer or wine, otherwise you may ask for them if this doesn’t happen.

For many the half rations are sufficient for a mid day meal. Virtually everything on the menu or in the tapas display area can be ordered in a half ration plate

Like many ventas, El Tropezon offers a set three course meal that is very popular with workers. This is commonly only available Monday to Friday. Basically, the price includes your first drink (i.e. beer, house wine, water, fruit juice) a starter, a main course and a dessert or coffee.

Most establishments offer three or more dishes for each section of the meal to choose from. They may be written up on a chalk board, printed in the menu or called out by the waiter on request. (The latter can be hard to follow if you are not used to fast Spanish, it may turn out to be a lucky dip!)

The price of a menu del día varies from place to place but will start at around 10 euros per person. Quite a bargain for the amount of food you get but don’t expect cordon bleu style cuisine. If the menu says “egg and potato” or “pork and chips”, you will normally get just that. Many places do not add any vegetables or salad garnish. You would have to order that as an extra.

Portion or half portion (both prices shown). Any meat items that say “Iberian” or “Iberico” refers to the black pig of Spain normally reared outdoors. This meat is always more expensive than white pigs reared in indoors.

In the venta Tropezon there is a sign on the swing doors separating the restaurant from the cafe, it reads: “Pidan mesa en la barra antes de pasar” – “Ask for a table at the bar before entering” You may see a sign like this in other establisments… If in doubt, ask the waiter or waitress.

Here are a few items from the menu translated into English.

The freezer will contain a mix of commercial, individually wrapped ice-creams, cones and frozen goodies. They may also have 3 basic flavours, chocolate, vanilla and strawberry sold by the scoop.

Ordering at a Table

In most ventas you may sit at a table or at the bar, peruse the menu and a waiter will take your order. Once you are seated there is no pressure on you to hurry. In fact catching the waiter’s attention when you want to order or pay can be difficult. If you order food, be prepared to clear the table of your personal items so that a paper table cloth can be laid out.

Bread and cutlery will arrive. The bread is placed out automatically and will be itemized on your bill even though you did not order it.

Paying for the Meal and Tipping

You will not be expected to pay anything until you leave. (This may be different in large cities or at internationally owned chains.) Service charge is included, but every waiter appreciates a tip; 10% is an average guideline. Leave your tip where you were sitting (on the table or at the bar). Tips are usually placed in a pot and each week shared out between all of the staff, so as to include the kitchen members too.

If a cow bell is clanged loudly and the staff all cheer you may have over tipped!