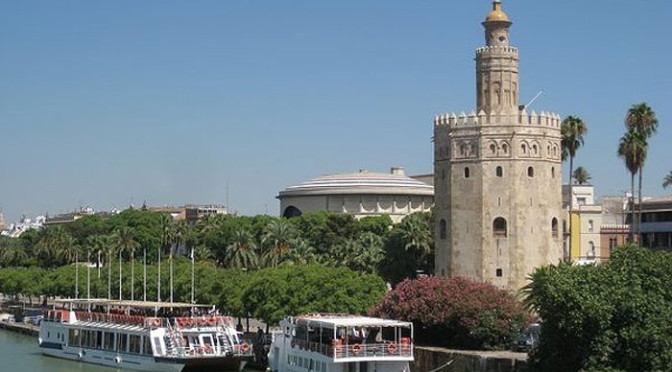 Sitting on the city side of the Guadalquivir River in Seville, visitors to the city flock to the Torre del Oro, translated it means Gold Tower, and was built during the 13th century by the Almohad rulers of Al-Andalus to protect the city from Castillian invasions.

Originally the tower was part of a pair, the other being located across the river in Triana, and together they were the end points for a solid chain that could be lifted or lowered in the river to prevent ships from passing.

Reserve a hotel in Seville here…

The reason for the name Torre del Oro has two possible origins, one being that precious metals arriving by ship could be stored in the tower until their owners could transport them into the city proper. The second possibility is that the tower which to this day has a gold leaf covered top may have originally been covered from top to bottom in gold leaf.

This second explanation is given widen credence, especially given the tower has a twin located on the city walls on the opposite side of the city which is known as the Torre del Plata (Silver Tower).

During the Middle Ages the tower was restored by the Castillian kings and used for a time as a prison, as well as defensive tower with cannons located on the riverside aimed downriver.

Sevilla’s Torre del Oro commands an impressive vista of the river, Triana, and parts of the old town, and it is well worth the effort to visit the top level for the view.

Directly below the tower there are also open decked tours buses that leave every 30 minutes or horse and carriage tours on demand, whilst on the river there are tourist ferries that ply the port and scenic sections of the Guadalquivir.

Visits to the tower and the Maritime Museum contained within at are possible daily.

Reserve a hotel in Seville here…