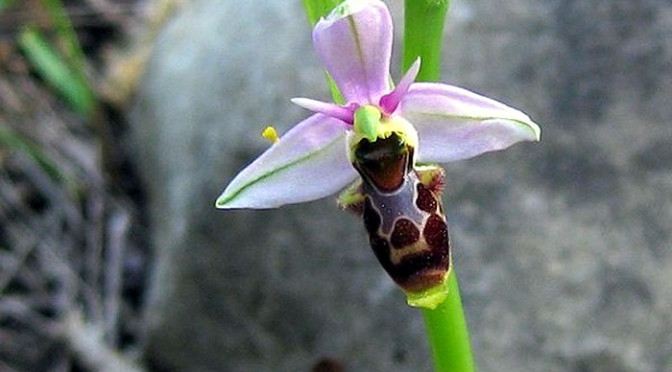 The Woodcock Orchid is my favourite flower any time I go into the countryside, even though it isn’t always visible since it only blooms from March to June.

To find this orchid really means getting off the roads in most cases and onto farmland or public land in the Natural Parks, preferably to areas that haven’t had sheep or goats present.

Whilst the Woodcock Orchid is found all along the Mediterranean, as far as nature in Ronda goes, you really want to get up to Grazalema, which is where you’ll have the greatest chance of seeing it accessibly.

Walk with the experts and discover the wildlife of Grazalema with Wildside Holidays.

Otherwise, I’ve also seen this flower around the back of Montejaque, on the hills above Jimera de Libar, and on the Ronda side of the mountains separating Ronda from Cartajima.  I tend to walk a lot over private land, which guidebooks and tour guides will often not do, so I see flowers in places other nature lovers might not know about.

The flower is an odd arrangement, with three sepals at the top, two of which point out to the side, and the third is concave, shorter, and angles forwards like the neck of a cobra. The variety of Woodcock Orchid most commonly seen in the Serrania will have sepals of  violet shading to white, with a green centre stripe.

Inside the sepals will be three smaller petals, two of them pointing up and out like pink horns, and a third will be green in colour pointing forward, and from the side will look like a duck’s head and bill.

The lip of the flower, which is the biggest part, will be a dark reddish brown with a waistcoat and two fluffy arms sticking out from the shoulders. I know my description sounds odd, but look at the photo!

Typically you’ll find Ophrys Scolopax reaching heights of around 50cm, and rarely in clumps, so if you see one specimen, that might be it for a few metres. Most of the plants I’ve seen have been around 30-40cm, so watch your step. 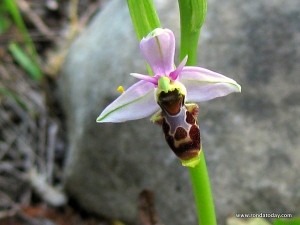