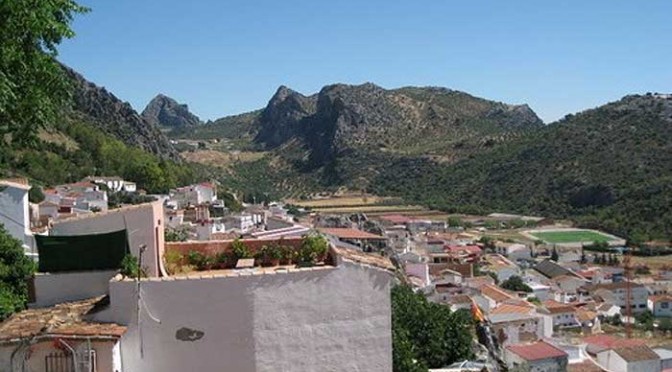 When visiting Ronda, getting out into the little villages is one of the must do excursions that would render your vacation incomplete if you didn’t do, however a lot of visitors to Ronda don’t have access to a car, so Benaojan is one of the options to see an authentic white village.

Located on the southern boundary of the Sierra de Grazalema, Benaojan is convenient because both bus and train visit the village, and the trip is only 25 minutes from Ronda. My own trip saw me take the train along Mr Henderson’s railway walk, a comfortable and air conditioned journey that does however stop at Benaojan Estación, a small hamlet below the main village that requires a 20 minute walk before you see what Benaojan has to offer.

Arriving by train you’ll see Benaojan to your right and up the hill, it is a steep walk but is more or less suitable for most fitness levels except those with heart conditions. Begin by crossing the railway line and following the signs for the Hotel Molino del Santo. You’ll have to pass the little venta next to the drinking fountain at the station, and this is a great place to have a drink or some tapas while you wait for your return train.

Continue past the hotel and just beyond you’ll see the first of Benaojan’s many small reasons to visit. Below the path you’ll see a small pool of water, which is the Nacimiento de los Cascajales, a fresh water spring that is one of the sources of the Rio Guadiaro.

Our next stop is in the village, you’ll pass several run down properties that are home to local Gitanos, who are very friendly people and will happily exchange an ‘hola’ as you walk by. At the first little plaza entering Benaojan you come across a rather dirty and run down fountain, ‘Fuente del Zuque’.

During Moorish times this plaza was where the local market would be held, the zoco, a modern word derived from the Arabic souk. It was also a popular livestock watering station, and is historically important for being the former laundry of the village, Benaojan used to have a soap factory, and this fountain is where local ladies would wash clothes and blankets.

As you wander the streets of Benaojan you will see several factories of local pork products, and the best is a little shop at the end of the main street, in the direction of Montejaque, the shop is called Jamones Isidoro, and everything sold is made in Benaojan, from legs of ham (Pata Negra), to chorizo, and other products, and everything is hermetically sealed making it easy to take home.

Benaojan has the appearance of a modernish village, in fact people have lived near Benaojan since pre-historic times and one of Europe’s most important sites of paleolithic cave paintings is just 4.5km away at the Cueva de la Pileta, though the people who inhabit the village are a more recent wave of migrants.

Prior to the Christian reconquest of Andalucía, Benaojan was a small Moorish village, part of the defensive tower line that defended Grenadine Andalucía from Christian incursions, and her people were herders and lumber merchants. The village is named after the clan leader Ojan whose people settled the area after 712 AD, thus naming the village Benaojan.

After the Christian conquest a Moorish uprising effectively spelt the end of Muslim people in the Serranía de Ronda, and Benaojan was not spared, in fact the entire village was cleared and on the 6th November 1571, 60 families loyal to the Spanish crown were given alotments to rebuild the village as they saw fit.

The Mosque was destroyed, and in its place the Christian church built, the Iglesia de Nuestra Señora del Rosario, evident by the octagonal shape of the nave and squashed outline of the church which is completely surrounded on all sides by homes.

The church has undergone several improvements since it was first built, notably in the 17th and 18th centuries as the population of the village boomed, and then again in the 1940’s to restore the church after the devastating effects of the Spanish civil war. Within the church the original gothic vault near the main altar can still be seen.

In the upper streets of the village you will also see several narrow alleys where the rock outcrop covers the street and seems to push the houses down into the valley below. In fact the village is generally quite stable, and those rocky outcrops you see have been in place throughout the occupied timeline of the village.

As you wander the streets, do not miss seeing the painted fountain, Puente Pintada, the most important of Benaojan’s many fountains, and the one which gives the main street its name, Calle Fuente. This little fountain has been retiled and decorated by the Asprodisis Association, but has been in use since ancient times, and was the main fountain on the road between Cortes de la Frontera and Villaluenga del Rosario.

Be sure to appreciate the karst mountains surrounding Benaojan while you are here, most are still growing as Africa pushes under Iberia. To return to Ronda, simple retrace your steps back to the station, or at around 1:30 you could catch the bus outside the Unicaja bank.

One thought on “A Short Trip to Benaojan”