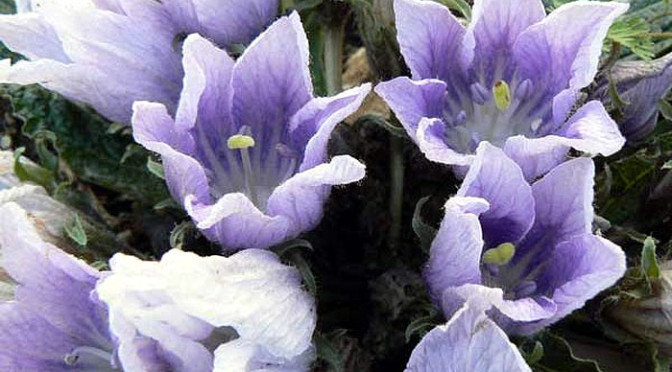 The mandragora autumnalis is an autumn and winter flowering beauty here in Andalucia and is a plant totally surrounded in myth and folklore. The mandrake belongs to the Solanaceae or Potato family and has been mentioned over the centuries many times, even in the Bible it was noted as an aphrodisiac.

From September to March it can be seen in olive groves, in fields or even along the verges growing as a large clump of enormous dark green leaves. If you take a closer look you will see the wonderful lilac-pink crocus like flowers, often 10-30 on a single plant and after flowering there are enormous yellow/orange seedpods.

It has a taproot of 90cm-1.20m (3-4 feet) long, often forked and said to resemble a woman with an enormous hairdo. If you are a Harry Potter fan you will recognise the mandrake from the Herbology classes at Hogwarts! You’ll find the plant in numerous sites, from Sierra de Grazalema, Canete La Real to Olvera, you just need to get out there and have a look.

It is said that in Medieval England it grew beneath the gallows of murderers and sprang up from their sperm, but woe betide anyone who tried to dig up the plant. It was said that the taproot would scream, driving mad the person trying to excavate it so, eventually, they learned to tie dogs to the roots to pull them out. Of course it didn’t matter if the poor dogs died mad.

In the Harry Potter book the young magicians have to wear ear-mufflers to protect their ears and to stop them from going mad. The root itself is highly toxic, it is rich in alkaloids, for example scopolamine and atropine and therefore anyone playing around with it could very likely kill himself or someone else! It is probably best appreciated through the lens of a camera.

Manuals of Magic say that the root of the mandrake wrapped in silk and kept in a chest will ensure that you are never short of money (I must get around to trying this one day). There is also a saying in some parts of England that if you manage to keep a mandrake plant for 7 years it will turn into a child! This child will follow you everywhere and do your bidding! I don’t think I will give it a try thank you very much.

For more information on the wildlife of our area please see www.wildsideholidays.com