Yesterday the Councillor for Tourism Francisco Cañestro, and the Junta de Andalucía’s Minister of Tourism, Commerce and Sport, Luciano Alonso Alonso officially reopened the Arab Baths in Ronda after extensive renovations allowing wheelchair access for one of Andalucía’s most important Moorish monuments.

END_OF_DOCUMENT_TOKEN_TO_BE_REPLACED 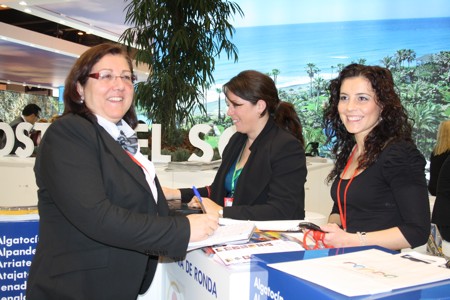 Ronda was recently represented at an international travel exposition, la Feria Internacional de Turismo (Fitur) in Madrid by the mayor Antonio Marín Lara and councillor for tourism Maribel Morales along with Alfredo Carrasco of CIT, and a small group of officials from the office of tourism and local business people.

Invited to participate by the Costa del Sol Tourism Board, Ronda representated the entire Serranía, including local villages such as Benaojan, Gaucín, Setenil, Grazalema, and displayed information about the three natural parks surrounding the Serranía.

The Serranía de Ronda is often under-represented within the travel industry, and is considered by many travel operators to be an inland Costa del Sol daytrip, a mindset the official tourism offices in Ronda are keen to dispel.

Major projects announced at this years Fitur were the accessibility of Ronda program, and further strengthening of the twinning relationship with the city of Cuenca in Castilla-La Mancha.

Over the next few months significants parts of the main tourist walk in Ronda, including streets in the old town, will be upgraded to make it convenient for people with limited mobility to enjoy the sites of Ronda. Unfortunately the cost and difficulty of making monuments such as the Mondragon Palace accessible isn’t possible.

Ronda’s twinning with Cuenca is to receive a major boost under an EU program. 300,000€ of European money has been allocated to encourage closer working between Ronda and Cuenca which both share a similar topology with an older city, gorge, and hanging houses.

Expertise in attracting tourists to Ronda will be studied by officials from Cuenca, a program Ronda tourism hopes they will be able to export to other cities.

At Fitur, Ronda’s mayor Marín Lara also announced the creation of a new film festival, the political film festival of Ronda, to be held annually in the city and will be a grade two festival, equivalent to the Berlin Film Festival.

This marks a significant development in the media industry in Ronda, which is also home to the Business Media School. Ronda’s political film festival in 2010 is scheduled to run from 27th November to 4th December, and has the financial backing of the Ministry of Culture in Madrid.