‘Apart from the fiesta, why do you want to go to Ronda?’ Verne, my wife, asked.

‘Because it’s got the oldest bullring in Spain, and it’s right off the beaten track.’ I said.

And something else. Since seeing him in bullfights thirty years ago I had dreamed of meeting Antonio Ordóñez, one of the greatest matadors, known as El Maestro. He lived in Ronda. We were coming from Morocco to Granada to see the Alhambra. We didn’t get there.

Forty-nine kilometres from Marbella and the glitz of the Costa del Sol, in the mountains, Ronda perches on a cliff top. Moorish battlements rose above us as we approached. The horseshoe-shaped gateway heightened the impression of entering a North African Medina.

‘I love this vibe,’ said Verne, as we mingled with the locals and peered into the cafés and bars full of shouting Andalusians, regarded by the rest of Spain as being loco, crazy.  The aromas of garlic, olive oil, cigars and wine pervaded the streets.
There was an extra buzz as the annual September feria, or fiesta, was about to begin.

Next day, flamenco from loudspeakers, shouting children and laughing voices got us out of bed. Street parties were in full swing. Two women grabbed Verne and they danced the sevillana, the one with the twirls and hand-clapping. We staggered out of the throng and on to the next for there was no escape at a feria.

At times we were overwhelmed – the noise, the music and our difficulty in understanding the local dialect. But they loved us for trying, plied us with wine, and would not allow us to buy a round. Bars were havens but a bar in Spain can crackle into overdrive with a suddenness that takes your breath away. A couple of guys or girls can take to the floor, heels stamp, hands clap, the air rent with ‘olés!’ and the music can wake the dead.

On day two, the bold Verne asked, ‘Why don’t we buy a place here?’

It was more a statement than a question. Within days, an agent had found us an apartment built on centuries old battlements, looking over a valley at distant mountains. Verne had fallen in love. And I had not forgotten Ordóñez. I told Verne about my hero.

‘We might see him, even meet him,’ said I, with a touch of veneration in my voice. ‘He’ll surely be here for the feria.’
‘That’s a long shot,’ said the ever-practical wife. But we lads are the romantics. We can dream of meeting an icon. We asked around.

‘El Maestro? he was here, he comes and goes,’ we were told.

The Bar Maestro was his favourite spot and named after him. I peered inside, inhaling scents of garlic and wine . It was full of joking, laughing gesticulating men and women having their lunchtime tapas and drinks. ‘Not a chance of seeing him in there, ‘I said, ‘we’ll sit outside and wait.’

Slowly the bar emptied as it was the time of siesta. A few figures remained. I peered into the cave-like interior.

‘It’s him!’ I whispered, ‘I think…’ I dithered like a schoolboy going for his first autograph. This was the great man, a national hero, decorated by the King of Spain and a legend in Ronda – if it was him.

I stepped inside. He turned, cigar in hand, and smiled.

‘Are you El Maestro, Antonio Ordóñez?’

‘I saw you fight in Pamplona four times and I’ve read Hemingway’s last book, the one about you.’ He laughed with pleasure, introduced his wife and friend Bosco. On being presented to Verne, he bent low over her hand, kissed it and asked how she was enjoying Ronda. As she replied he appraised her with a rogue’s eyes. Verne, ever aware, responded to this gallantry with modesty. He turned again to his awe struck fan. Wine flowed and our Spanish improved with every glass.

‘Would you like to stand with Bosco and me at the ring-side during tomorrow’s fight?’ he asked me. ‘It will be an honour,’ I said in disbelief.

As we left I said in my wife’s ear, ‘He must have been a good looking man,’

‘Still is,’ she breathed, more enthusiastically than was necessary, I thought.  I walked away in a daze that was Ordóñez induced as much as the wine, mission accomplished.

Next day men and women splendid in the dress of Goya’s era, two centuries ago, paraded around the town on superb horses and in carriages before the fights began.  The occasion was a sell out, people coming from all over Spain and beyond.  For El Maestro’s promising grandson, Francisco, was fighting. Bosco bought the tickets.

‘Pardon me Verne but it is not a sport,’ said our friend, ‘because we know how it will end. It is a ritual, primitive, pagan, yes. Man against nature, the bull,’ he said. ‘Death is at the end for one of them.’ We listened with attention.

‘We Spanish people admire courage. In the corrida, the bullfight, we can see it in a brave bull and a valiant torero,’ he said. ‘Let us hope for an emotional experience now,’ he smiled.

That afternoon Francisco upheld the family name with honour.

Two ears were cut for him from the dead animals in recognition of his elegance and bravery. He killed both his bulls cleanly and well.

Crowds milled about after the spectacle was over, aficionados and tourists, hoping for a glimpse of the matadors. ‘Find Antoñín and there will be El Maestro,’ said Bosco.

Perhaps Ordóñez’s greatest disciple is Antoñín. He is a mongoloid with the characteristic weak eyesight and obesity of Downs Syndrome. Every workaday morning he walks to the bullring, being greeted by all that know him, which is almost everybody.  He shows visiting Spanish speakers around the museum of bullfighting. He is said to have gracia, a gift of gentle people, deeper than that other untranslatable word, simpatico, an innocence, a kindness. Lunch is at the Bar Maestro.

One day a journalist, looking for an argument as they sometimes do, spoke up in the bar in disrespectful terms of the great man. The gentle admirer asked him once to stop. He didn’t. Antoñín slapped him in the face. Pandemonium. The scribe apologised profusely. The whole town knew and the local paper carried the story. They loved Antoñín the more for it.

We found El Maestro where the dead animals are cut up and distributed to various charities.

Ordóñez ordered an ear cut from a bull and handed it to me, washed and clean.

‘Wrap it in salt and keep it in the freezer for two weeks,’ he smiled. ‘Un recuerdo de Ronda.’ A souvenir of Ronda.
‘Keep that thing out of my fridge,’ whispered Verne. Bosco took it. In a parody of the Spanish welcome ‘My house is your house’ he said, ‘My fridge is your fridge,’ and winked.

Days later as we waved goodbye to Bosco, Verne said,‘That was better than the Alhambra.’

Article written by Bearnard O’Riain, a published author who has written an autobiography ‘Running to Stand Still‘, an account of his years as an angry and abusive husband. These days Bearnard runs the MURAL support group which helps other men recover from abusing their spouses and families in Johannesburg’s northern suburbs, including the infamous Alexandra township. 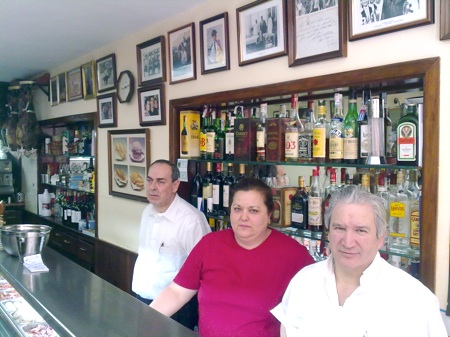 This charming & tiny tapas bar can be found in Ronda’s Calle La Bola a few meters along from the large Unicaja bank on the corner of the Calle Espinel (locally referred to as Calle La Bola) across from the bull ring.

Established in 1946, it has been run for the last 38 years by Rafa and his wife Paca (she been there for 30 years). This family run establishment is quite small, standing room only in fact, except for the small corner with a couple of stools in the front of the bar next to the entrance, a favourite spot for regulars. END_OF_DOCUMENT_TOKEN_TO_BE_REPLACED