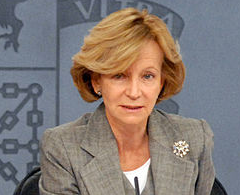 With growing concern at the state of the Spanish economy and ongoing efforts to reduce the budget deficit failing, the Spanish government will today reintroduce a wealth tax (patrimonio), which it abolished just 3 years ago. Spain’s deficit reduction is part of a stability agreement with the European Union in response to the current financial crisis affecting the Eurozone.

The new tax is expected to assess wealth in the 2011-2012 years, with income to the government coming into treasury in 2012-2013. Hoping to raise an additional 1 billion euros, Elena Salgado, finance minister in the PSOE led government stated that the tax will likely affect 160,000 of Spain’s wealthiest people, who will face tax bills of upto 2.5% of their declared assets.

Citing concerns within PSOE that Spain’s former wealth tax unfairly targeted middle class savers, Salgado confirmed the new wealth tax threshold has been raised from 120,000 euros to 700,000 euros, but refused to speculate on post-election threshold. In addition, exemptions for people’s homes will be set at 300,000 euros.

The introduction doesn’t require parliamentary approval, a full sitting of cabinet being sufficient, and it is understood the opposition PP who have previously rejected a reintroduction of the wealth tax will accept the measures, and may choose to retain the tax after the election if successful in forming a government.

The move is expected to be popular with left wing voters, and could reduce the 15 point difference in opinion polls between PSOE and PP, though with decisions by PP recently to back the government on stimulus measures, including the constitutional change to ensuring Spain’s central and community governments balance their books, polls may not be as affected prior to the Nov 20 general election as is hoped by PSOE leaders.