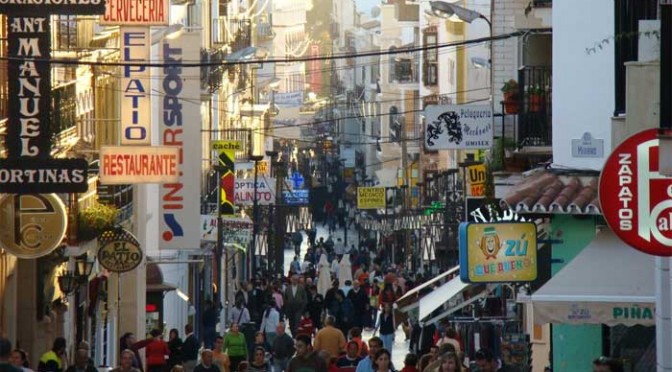 Ronda is a small city, some unkindly say it’s stuck in the 20th century from a retail point of view, but those of us who choose to make Ronda our home like it this way. Indulge in a touch of nostalgia and do some window shopping on La Bola, perhaps interrupting your walk for a café con leche y palmera and remember what it must have been like at the beginning of the 20th century.

There aren’t any big malls or suburban shopping arcades here, nope, Ronda is proudly old-fashioned and clinging on to small family owned shops because Rondeños like it like this (Rondeños quieren es asi). There are no large department stores or overstocked stores with regular ‘sales’, shopping in Ronda is much more relaxed, your aim is to find what you need and be able to buy without having to worry about having too many choices.

The retail market caters not just to Rondeños but to the wider Serrania de Ronda and farming district, so almost everything you could need is available if you know where to look for it. That is one of the secrets of shopping in Ronda, knowing where to go if you need a particular item.

Many shops in Ronda have staff with some English skills, but most don’t, on the other hand we shouldn’t expect local people to understand us even though English is considered the language of international business. This includes many of the tourist shops, the staff may be able to tell you a price in English, German, or French, but asking for details about a product may be a challenge so knowing a few words of Spanish will most likely be of invaluable help.

A few words of Spanish and the use of hands and feet is often all you need to communicate and get by, which reminds me, check out our page on learning Spanish for information about Spanish classes in Ronda or other websites with free courses in Spanish you can complete in the comfort of your own home.

Apart from Calle Espinel which is the main pedestrianised shopping street in Ronda, and where most of the fashion stores are located, many of the side streets surrounding La Bola hide a number of small stores that are often overlooked. Bookshops, pet stores, stationers, flamenco music, thread and buttons, little garden centres, they’re all hiding in plain view just around the corner or a bit further; all are worth discovering.

Calle Espinel (formerly known as Calle de la Bola), is a one kilometre long pedestrianised street containing most of Ronda’s fashion stores, shoe shops, a number of discount stores, electrical stores, toyshops, bars and coffee shops and much more. This same street is a fantastic place to visit during any major fiesta in Ronda because the municilpality and chamber of commerce erect coloured lights, balloons or bunting.

Curiously, tradition holds that Calle Espinel, which is now named after one of Ronda’s greatest sons, Vicente Espinel, was originally named Calle de la Bola in honour of some children who created a snowball and rolled it from the top end down to the bullring during a rare snowy winter sometime in the 19th century.

The industrial zone on the other side of the railway line is also a place not to be missed, although it will be of less interest to tourists, for it is here that Ronda’s garden centres, hardware stores, car dealers, tradespeople and other are located. Whilst the side streets of Ronda include small ferretarias, plumbing or electrical suppliers, the larger shops are in the poligano district. The twilight zone between Ronda’s residential streets and the industrial zone is also where you’ll find most of the larger supermarkets, including Mercadona, Dia, and Supersol.

Ronda Tourist Shopping Visitors to Spain are not alone in wanting to buy memorabilia home with them, in fact even the expats who live here will often buy Ronda keepsakes, either to keep for themselves, or to have something in the house they can give to visitors from back home.

So, what are the sorts of things tourists can buy in Ronda? For starters we have postcards and small trinkets like Ronda fridge magnets, little fans for the ladies, even bullfighting outfits for the kids, all of which are available from the tourist shops on Calle Sevilla, around Plaza del Socorro, in the vicinity of the Santo Domingo Convent, and way down in Espiritu Santo.

Books about Ronda are popular and are easy to spot, they have a yellow cover and a little flag in the top corner indicating the language the book is written in. A local publisher also produces a series of excellent guides to local nature, Ronda recipes, and some of the tourist highlights in the Serrania de Ronda.