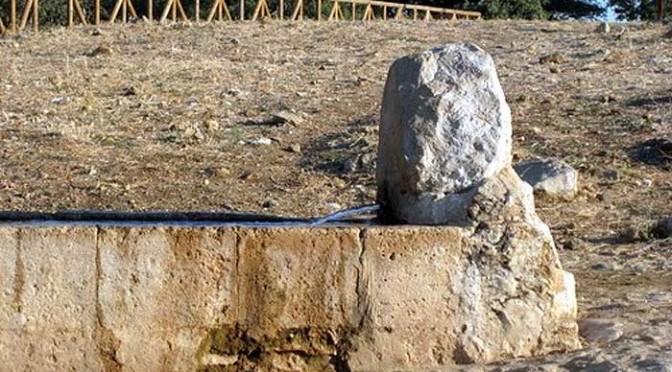 The Ronda-Pilar de Coca loop (PR-A 71) is a wonderful walk for exercise junkies and visitors to Ronda alike, it’s a circular route that takes us about 9km out of Ronda, past vineyards, oak groves, an old aqueduct that supplied Ronda with water, the Pilar de Coca spring, and finally the mountains of the Sierra de las Nieves and the Serranía de Ronda.

If you have the walking guide from the Ronda Tourist Office, be aware that we are taking the opposite direction, past the hospital instead of the route up the ‘La Pastora’ hill. Either way is fine, and both as challenging as the other.

Click here for guided and self guided walking in the area

We start our walk at the “Fit Factory” and Feria grounds at the entrance to Ronda, at the intersection of the Carreteras to El burgo, Arriate/Campillos, Sevilla, and the circular highway that goes to Aranal. The part of town is where the courthouse and fire brigade are located, and the roundabout is commonly known as the Campillos roundabout to the English speaking residents of the city.

Cross the Fit Factory car park heading toward the El Burgo carretera, and walk along the footpath at the side of the highway until you reach the old closed hospital, then cross the road at the pedestrian crossing, and pass under the railway line. At the end of the ramp turn right onto a dirt or concrete track, and keep going until you reach a Y intersection, then veer left to the side of the venta, and continue past olive groves until we reach a crossing over the railway line and just beyond that the highway.

On the other side of the highway, we take a path to the left of the Patronato Virgen de la Paz, to out right we’ll see the vineyard Pasos Largos, part of the El Juncal hotel complex. Continue going forward on this road, making sure not to take the two dirt tracks on the right.

After passing the vineyards on your right, you’ll start to see farmland covered with trees, and probably herds of sheep or goats eating the grass below them. These are Holm Oaks, and are one of the most common trees you’ll see around Ronda. A little further on to your left you’ll see a stone aquaduct crossing over the carretera, this is the ‘La Hidalga’ aqueduct built to provide water for the Ocho Caños fountain in Ronda’s Padre Jesús district during the 1700s.

After 2.6km we arrive at the top of a steep hill into a plain where several dirt tracks intersect, and to our right behind a large boulder you’ll see the Pilar de Coca, a concrete trough with running water. This water is safe to drink, and you can refill your water bottles here as well.

You’ll now return to Ronda following the track that is to the right of where you entered the Pilar de Coca, continue downhill for around 3km before you reach a t-intersection, and a sign showing all of the birds of the Serranía de Ronda typically seen during the year at this spot. Some are seasonal birds, but if you have a pair of binoculars with you, take a look at the fields to your left.

At this intersection, turn right, the road looks long, but soon leads uphill,and then steeply downhill back to Ronda. It won’t be long until you see the Ronda skyline on the horizon, and you can’t get lost on this section of track if you keep going straight ahead.

All around us as we descend back to the fería ground in Ronda we’ll see mulberry trees, while in the distance lie the mountains closest to Ronda, the Sierra Hidalga furthest away to the east, and to the south-east the cliffs of Pompey.

These are so named after legend tells that during the Roman civil war between Julius Caesar and Pompey, the defeated Pompey and seven mules of treasure hid in the caves until it was safe to leave, however so great was the search for him that he was forced to abandon his treasure and escape on foot.

Very soon you are back in Ronda, the total distance of the loop is around 13km, and is a great walk or mountain bike route, though in summer it is better to complete this walk in the early morning or late evening.

Gallery of Photos from the Walk;