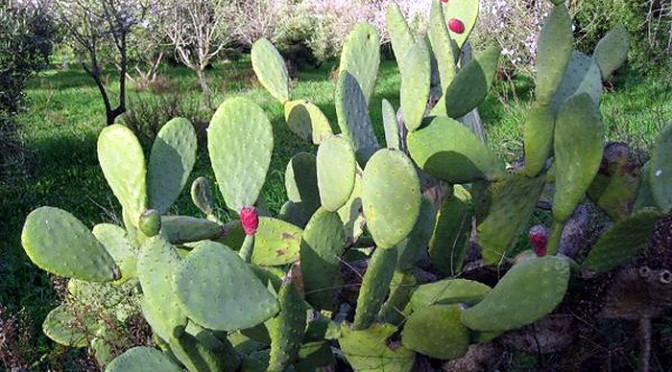 Dotting the Andalucian countryside from high to low, the Prickly Pear, or Higo Chumbo as it’s known in Spanish, has become one of the iconic symbols of the region. Even though the succulent is found from Portugal to the Eastern shores of the Mediterranean, in Andalucia the fruit is held in special regard as a dessert.

Looking like an unfriendly briar patch of thorns attached to flat green paddles, the Prickly Pear is a succulent that grows in dry and semi-arid conditions, and can be a large as a mini-van when fully grown. Typically they will clump together making an impenetrable wall.

The variety most often seen in the wild in Andalucia is green with a checkerboard pattern of the thorns on the flats of the leaves spaced about 2.5cm apart, and two rows of offset thorns around the outer edges. The fruit grows on the outer edges of leaves and begins as a green bulb that usually grows to about the size of a pear, but more oval in shape.

Learn about the wildlife of Andalucia with Wildside Holidays.

A round yellow flower grows from the top of the green fruit, and after this has died, the fruit will begin to change colour until it is cerise toned, after which it will fall from the leaf. The green fruit is considered better tasting, and if the fruit is left to ripen will probably never be harvested.

Originally from the Americas’, the Prickly Pear has invaded almost every square kilometre of land, and has proved difficult to remove, you might say it is an invasive species that in some places is not at all desired.

Fortunately the fruit is edible, is very sweet, gives you a vitamin boost, and also makes a potent spirit when distilled. The leaves of the Prickly Pear can be peeled and fried, and was a popular vegetable substitute in the past when Andalucia was impoverished.

Care must be taken when peeling the fruit and gloves are recommended. The spikes on the fruit are easily avoided, but the small hairlike glochids detach and embed under the skin and are almost impossible to remove. A sturdy pair of rubber or leather gloves will be needed.

And if you ever have a toothache, it seems that as many as 9,000 years ago in the Americas’ people knew of the medicinal properties of the Prickly Pear which could lower fevers from drinking a juice made from the fruit, or by roasting the leaves, inflammation and toothache could be relieved by using it as a salve.

In the autumn months you will often see people gathering in the main shopping street of Ronda, and the bigger towns of Andalucia with their supply of Chumbo fruit ready to be peeled, sliced, and bagged, and then sold to passers by. If you’d like to try some, they will often have some water in a cup to help wash it down.