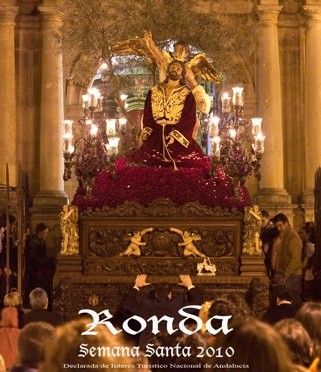 Edit: You can get the itinerary for Ronda’s 2010 Semana Santa processions here.

The poster advertising Semana Santa 2010 in Ronda has been announced by the Hermandades del Huerto, Prendimiento y Gitanos, showing a photograph of one of the icons inside Ronda’s many churches.

Clothed in a red tunic with gold leaf, and supported by an angel, the float has already won the hearts and minds of Ronda’s Christians many of whom are delighted to see it featured on the poster used to promote the Holy Week in Ronda.

The poster was designed by Jesus Lopez and Ana Belen Cabrera who took the photo during Semana Santa 2009.

This year sees Easter fall between the 15th and 24th of April, though the official calendar of events for the week has yet to be finalised.

Holy Week, known as Semana Santa in Spanish, is a week of religious processions and fiestas, and is a bigger celebration than Christmas. Through Semana Santa each of the Catholic Brotherhoods of Ronda host their own processions, and most pass through Plaza del Socorro to receive blessings from senior priests in Ronda.

Also in 2010, the new Museum of the Fraternities will open in the old court building on Calle Armiñan, thus making 2010 an important year for Semana Santa festivities in Ronda. The Holy Week festivities in Ronda are amongst the most important in Andalucía, so the museum has been described by Luis Candelas, president of the Association of Fraternities and Brotherhoods as a welcome addition to Ronda’s initiatives.