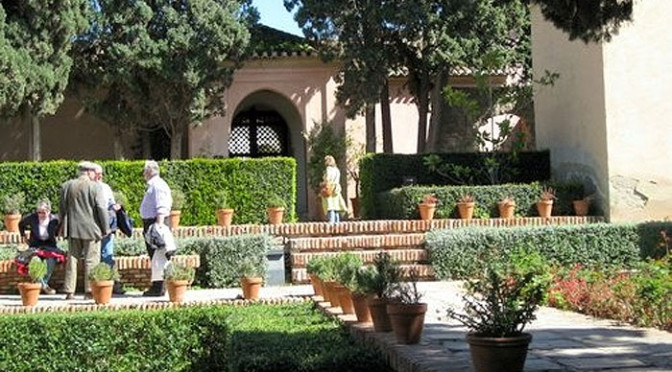 On the city’s highest ramparts are the dual fortresses, the Alcazaba and the Gibralfaro castle, both originating in their present form from the Moorish period, though parts of the Alzacaba are known to have been built on ruined Roman structures.

Malaga has recently started to shine as a tourist destination, latest statistics suggesting over 750,000 passengers of cruise ships tour the city every year, so it isn’t surprising that repairs to many of the city’s best monuments have been carried out. The Alcazaba area is one in particular that has benefited and is now an essential site to visit.

Search for hotels in Malaga here…

At its highest point are the towers of the Gibralfaro Castle, proudly standing more than 130 metres above the city port and giving spectacular 360 degree views of the city and just below, the Plaza de Toros of Malaga. The castle is the newest structure in the complex, having been built in the 14th century by Yusuf I, and is believed to have been constructed on an earlier Phoenician tower that may have been a lighthouse.

Actually the name Gibralfaro is descended from the Phoenician word for light, Jbel-Faro, and being a semitic language, shared this root with later Arabic tongues that came to be used in Al-Andalus. The word faro has entered Spanish from this and generally means lighthouse.

The Alcazaba (from the Arabic al-qasbah, قصبة, meaning “citadel”) lies further down from the castle, though the two are connected and the 2 euro entrance fee will get you into both. Malaga was an important port city for the Kingdom of Granada, but long before that had been both part of the Emirate of Cordoba, and after its fall to the Christian monarchs, the city became nominally independent under the Algerian Zirid dynasty. It was in this time that King Badis of the Zirids built the Alcazaba in the 11th century.

Within the Alcazaba is the military citadel of the Moors of Malaga, as well as the Grenadine Palace (Cuartos de Granada) where governors of the city would live whilst in control of Malaga. The palace itself is in parts older than the Alhambra, and may in fact have been an influence when the Alhambra was built, and many visitors to Malaga’s Alcazaba consider it more beautiful, though it is clear the gardens in Malaga’s Alcazaba are smaller and not as impressive.

Whilst Almeria’s Alcazaba is the biggest in all of the territory formally ruled by the Moors of Al-Andalus, the Alcazaba in Malaga is considered the most complete and best preserved in Spain, and is still a huge monument that defies a quick look around. Expect to dedicate at least 3 hours or more to fully exploring the Alcazaba in Malaga.

Part of the reason the Alcazaba is so big relates to the defensive walls built around the hill with huge towers, gates, and double backed entrances designed to make the fortress easy to defend, and impossible to attack. Despite being under Muslim rule for nearly 800 years, very little of that period could ever be said to have been completely peaceful.

A highlight of the tour of the Alcazaba is the living areas of the Moorish governors in the Cuartos de Granada. It is still possible to see how these people lived, and the ornate walls and pillars should not be ignored. Mudejar carpentry and design are evident in the ceilings and wood panelling, with many patios opening to ponds and small gardens.

Malaga’s small but interesting Archeological Museum is housed within the Alcazaba.

Search for hotels in Malaga here…