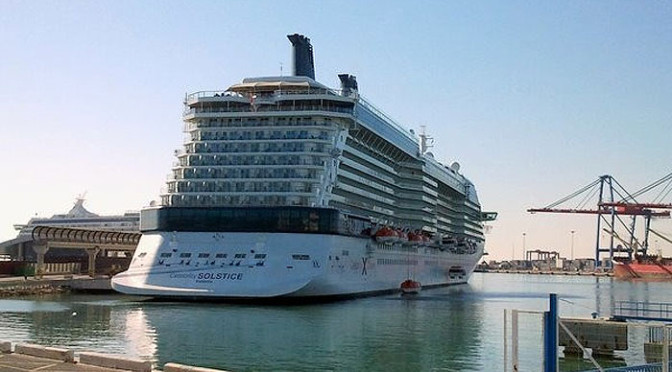 Malaga’s cruise ship terminal is one of the newest and fully featured in Spain, despite the 3000 years of operation of the port, and is located only a few hundred metres from the main pedestrianised part of the city centre.

At present the terminal is able to accommodate two ships at a time, though it isn’t uncommon to see as many as four cruise ships, two under anchor, and two berthed at the termninal gangways.

Regular departures occur all year yound, and with Malaga’s Mediterranean climate makes a fantastic port of call that passengers should look forward to. Weather in Malaga is mild all year round with the best weather being between March and mid-November.

The terminal is a new building, very similar to an airport, with customs and immigration services, a cafeteria, and a small tourist gift shop. A city bus service passes by the terminal entrance every 30 mins on weekdays and less frequently at weekend and public holidays.

Dedicated shuttle services are provided whilst ships are in port, the most common destination being the port entrance which is at the western end of Parque Alameda, across the street from McDonalds, and at the beginning of the main shopping precinct. There are several hotels within 200m of the port entrance.

Between the terminal and the port entrance there is a lovely promenade with restaurants, bars, and nearby a small Supersol supermarket, all within 400m walking distance of the teramnal.

Ships berthed at Malaga will have views of the city including the Alcazaba and Gibralfaro castle.

Daytrips from Malaga to the Costa del Sol, Nerja and the caves, Antequera, Ronda, and Granada are all possible, check with the pursor on board ship for details.

Within Malaga most visitors won’t want to miss seeing the castle and Islamic era palace, the cathedral, the Roman ampitheatre, the Picasso Museum (a MUST see), or the Plaza de Toros. All are within a 1km walk of the port entrance and easily accessible for most levels of fitness.