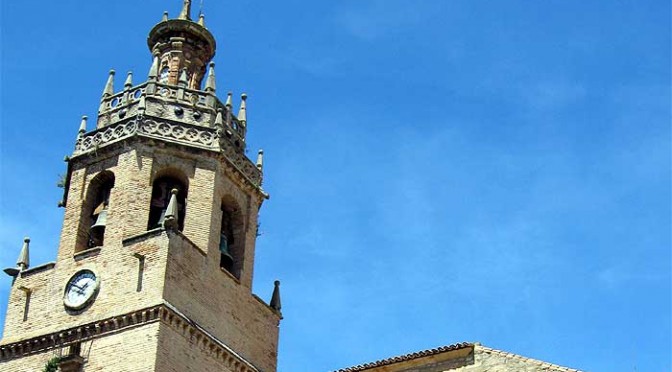 Originally built in the 14th century as one of the muslim Mosques, the Church of Santa María la Mayor. Known locally as the Iglesia de Santa María de la Encarnación la Mayor it is located in Ronda’s Town Hall square, the Plaza Duquesa de Parcent, and is the biggest and most attractive of the churches. Its distinctive tower and front facade make the church look more like a city hall than a church.

The main doors lead directly into a small vestibule which still contains one of the original columns of the cathedral built in the years immediately after Ferdinand and Isabella’s Christian conquest of 1485. Sadly an earthquake in 1580 demolished it and the church which stands in its place today is an incomplete replacement, though still very impressive both inside and out. The bell you see in the vestibule is a duplicate of the bells which ring every hour in the tower above you.

Many churches built on top of each other.

Archeological evidence suggests that the Medina Mosque itself had also been constructed on top of an older Christian church dating from Visigothic times, however we also know that this was built on top an even older Roman altar, possibly a temple to Diana, which built to honour the victory of Julius Caesar over the forces of Pompeii, Cneo, and Sexto in the battle of Munda (the Roman name for Ronda) in 45BC.

The balconies at the front of Santa María la Mayor were added later during the reign of Felipe II for nobility and gentry of the city to watch maestranza tournements, bullfights and other events being held in the square, but these days the square has been converted into a lovely park named in honour of the Duchess of Parcent. Within the church is a fresco of Christopher Columbus painted by one of Ronda’s celebrated painters, Jose de Ramos.

Entrance to the Santa María la Mayor is free for devotees and residents of Ronda, and just 4€ for tourists wanting to take photos and see the wonderful artifacts inside including the statues (pasos) which are carried through the town at Semana Santa (Easter).