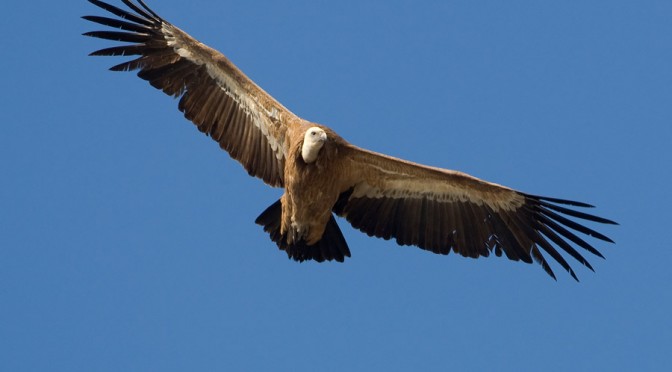 A colossus in our mountains! With a wingspan of 2.8 metres and weighing 8 kilos, that’s 9 foot and 17lbs in old money, Griffon Vultures Gyps fulvus is our largest resident raptor here in the Serranía de Ronda and Sierra de Grazalema.

Essentially a specialist carrion eater, this enormous bird is spectacular and the most easily seen raptor in our mountains. Throughout Spain, this species has increased steadily over the past 15 years by the provision of feeding stations, the last official census carried out to ascertain the number of breeding birds put the population at 17,000 pairs.

EU legislation threatened the status quo with the banning of artificial feeding stations. With the advent of mad cow disease (BSE), legislation was introduced requiring all dead carcases to be incinerated limiting the possibility of any further cross-contamination of this disease.

The affect upon many areas was a disaster for Griffon Vulture populations and other carrion eating birds. In fact, some Griffon Vultures, normally a placid bird, took to attacking livestock where feeding stations were closed! Happily, due to pressure from various conservation and agricultural organisations, feeding stations are now to be permitted again and will be regulated to include fenced off compounds sited more than 500 metres away from human habitation. Of course all carcases will have to have been tested negative for BSE!!!

Many visitors (and possibly those living in the area) find identification of raptors difficult and confusing. With 4 breeding species of eagle and other large raptors in the area, then I think this is not surprising! However, as far as our Griffon Vultures are concerned, identification is made less difficult if we take account of its unique flight silhouette. Next time you see this bird in flight, either at close quarters or in the distance, make a note of the almost total lack of tail in relation to overall size.

The depth of wing (leading to trailing edge) is very much greater than tail length. In many other raptors the tail is as long as the depth of wing. You could say, when in the air, Griffon Vultures look rather like a huge flying moustache!

Our local breeding population of circa 600 pairs and probably as many non-breeding birds, make this area one of the most important in Europe for Griffon Vultures. Perhaps not the best looking of birds, whilst perched or feeding, seeing these birds in flight is a natural wonder. They are among the best aviators in the bird world, using up-draughts and thermals to perfection.

In common with many large birds, Griffons save energy by finding airflows which reduce the need for the flapping of their wings. In fact, apart from take-off and landing, it is rare to see these giants of the skies flap their wings. Young birds can take 6 years to mature sufficiently to become breeding birds and this makes their adolescence one of the most protracted of all birds.

Adults can live beyond thirty years and once established in an area will rarely venture far from their home territories. Non-breeding birds however will range over wide areas, with some choosing to venture as far a field as Africa.