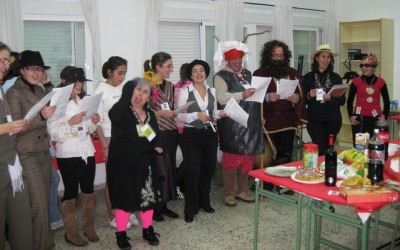 The staff and students of EOI decided to have a dress up party this year, though there was no theme, only that everyone made an effort to dress up as a character they identified with.

As you can see from our photos participants put in a lot of effort to have fun, the entire evening was definitely a highlight for many with prizes awarded for best dressed student, though sadly A+ pass grades weren’t offered as prizes.

Having recently visited Bavaria the German students hosted the evening and provided several German cakes, hot mulled wine, and German biscuits to the other classes.

EOI’s French students weren’t to be outdone arriving as characters from famous French television programs, though two Napolean Bonaparte’s also made their appearance leading to an outcry that the 1812 Spanish War of Independence was about to start all over again.

A grand evening was had by all, and from the Escuela Oficial de Idiomas a very Merry Christmas to all, especially to the students who couldn’t attend the party, you were sorely missed.