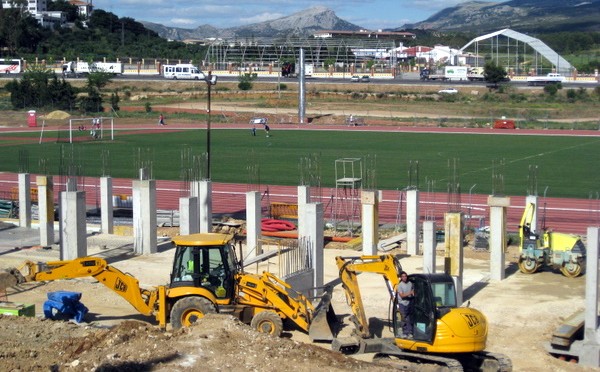 Construction of the new grandstand at the “Ciudad Deportivo”, Ronda’s track and football centre is gathering pace, with builders having completed the foundations and now working on erecting the main support columns of the changing rooms and seating.

Costing 1.4 million Euros, the second phase of development at the sport ground has created 14 jobs during construction, with final handover to the city expected in October.

For some time the state of the ground has been a cause of controversy with Ronda’s various political parties accusing each other of intransigence and lack of spirit, though from the perspective of users of the ground, frustration over lack of seating or decent changing rooms has given way to excitement.

The new grandstand will provide seating for over 900 spectators, team changing rooms, a press room with high access for television video recording, and six offices for sports related organisations in Ronda.

In addition, extra seating is planned beside the grandstand that will accommodate another 400 spectators, and four columns of lighting for night games will be constructed. Parts of the grounds will also be landscaped, particularly between the main entrance and seating.

The Ciudad Deportivo is the home ground of Ronda’s third division football team, CD Ronda, and the local third division rugby team, the Tortugas. CD Ronda are currently on form for promotion to the second devision at the end of the playing season, so the new stand is seen as a positive statement of Ronda’s commitment to sport in the city.