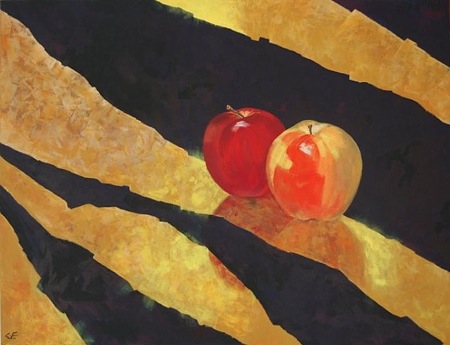 All her life Christine Ellingham has been painting and drawing, in fact her entire working career has been devoted to creative pursuits. Born in Buckinghamshire in England, Christine studied art at Banbury College of Art with emphasis on life drawing and draftmanship, before completing studies at Hornsey College of Art.

Many artists struggle to find work, but Christine was lucky to start her career in the comic industry drawing picture strips in the 1960s. Drawing scenes from girls adventure stories that were serialised in newspapers. As an artist Christine had the flexibility to work almost anywhere if there was a post office in the vicinity, and during the early 1970s she moved to Spain.

It was whilst living in Spain that she lost the use of her right hand to ‘Focal Dystonia’, forcing her to learn to draw with her left hand. These were troubling times for Christine but allowed her to develop her skill, initially with illustrations.

As an illustrator Christine has drawn for ‘Woman’s Own’ and ‘The Lady’ amongst others, and has accepted commissions from BP, the Royal Mail, and British Gas. During the 1980s and 1990s Christine worked for several fleet street newspapers illustrating politicians and royalty, as well as providing food and financial illustrations. Most recently she has designed coins for several national mints.

Retirement allowed Christine Ellingham and her husband Ron Morley to relocate to Spain again, and has given Christine the opportunity to really develop her painting, in stark contrast to a career of illustration.

Her first love is water colour, though she finds herself mostly using acrylic on canvas, and whilst she does complete local landscapes, she has said that still life appeals to her more at the moment, though like any artist reserves the right to use any media that captures her imagination.

Christine is a regular exhibitor at Ronda’s Artesanía Market, and has permanent exhibitions on display in the Hotel Molino del Santo in Benaojan, and Hotel Molino del Puente outside Ronda. She also takes part in exhibitions organised by Ronda’s Casa del Cultura and in the Andalucian Soap Company Shop.

Commissions are not accepted at the moment.

2 thoughts on “Christine Ellingham Acrylic and Watercolour Artist from Benaojan”