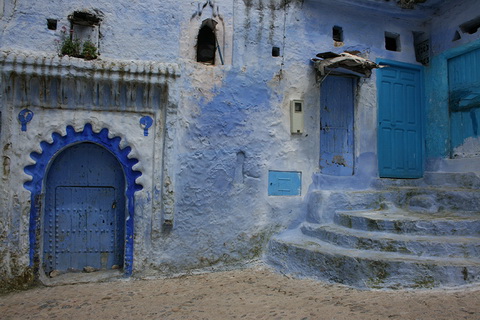 You may be wondering why a website about Ronda has an article about a hill top town in Morocco, but actually these two towns, despite being only recently twinned, share deep historical and demographic roots.

Chefchaouen was founded by Moulay Ali ben Rachid in 1471 as a stronghold from which the Berber tribes could defend themselves from attacks by the Portuguese invaders. The new inhabitants were mainly Muslim refugees that came from Spain. In 1485 when Ferdinand and Isabella conquered Ronda the entire city was exiled to the Genal villages, then in the great exile that took place some 70 years later these refugees were exiled to Morocco and many ended up in the hilltop town of Chefchaouen. They set about building houses reminiscent of their erstwhile Spanish homes, which is why the town is distinctly Spanish in flavour, the whitewashed houses, with tiny balconies, tiled roofs and patios, are reminiscent of many a white Spanish pueblo. Up until the 1920s when the Spanish took over, the town was infact closed to all foreigners, especially to the Christians, that is until the beginning of the Spanish occupation in 1920. During the war of the Rif, Abs-el Krim was able to oust the Spaniards from 1924 to 1926, but the Spaniards fought back and retook the town in the September of 1926 remaining in power until Moroccan independence in 1956. The blue color that is now synonymous with the town was actually only introduced in the 1930s by the Jews, up till then the windows and doors had been painted green, the traditional Muslim color.

We were lucky enough to stay in a beautifully restored Riad house turned boutique hotel Dar Gabriel, located in the historical Medina from where we explored the charms of this relaxed and friendly town. The first view of Chaouen, as locals call it, is stunning, sitting cradled between the mountain peaks above the fertile Oued Laou valley. Upon entering the town itself one is transported into a fairy tale world of higgledy piggledy streets framed by the glowing blues and greens of the centuries old whitewashed houses. The Medina is the old part of the town and at its heart is the Plaza Uta El-Hammam. It is here where you can watch the world go by enjoy the sights of the Kasbah and the beauty of the Grande Mosque. This mosque is unique in Morocco as it is the only mosque with an octagonal shaped minaret. The walled fortress of the Kasbah is also home to one of the most beautiful gardens in the town and nearby is a small Ethnographic museum. There is also an interesting art gallery that features paintings of the town throughout the ages. Chefchaouen is extremely easy to get to from Spain, there are ferries from the major port of Algeciras, or from Tarifa on the high speed ferry, or just a short flight from most major airports. So why not explore and discover this wonderful place that feels almost otherworldy yet is only a short trip across the Straits of Gibraltar.