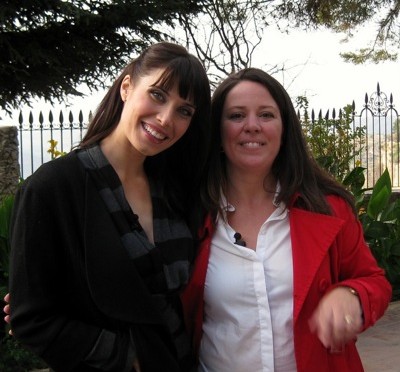 Ronda’s newest councillor, Charlotte Wilmot, who takes on Extranjeros and Commerce, recently spoke exclusively to Ronda Today about her role and hopes for the next year until the 2011 municipal elections. Charlotte is a British born foreign resident, and the first non-Spaniard to be elected to Ronda’s town council.

Following the resignation of Maribel Morales, councillor for tourism in April after disputes with the mayor Antonio Marin Lara, Charlotte Wilmot was informed that as next on the PSOE list she would be called up to head a delegation.

Politics in Spain doesn’t work quickly, and Charlotte wasn’t confirmed as councillor until the monthly meeting of the full council in May. The role of councillor for extranjeros and commerce creates a new delegation for foreigners of all nationalities in Ronda, and adds a lesser known delegation of commerce to Charlotte’s workload.

Charlotte is well known amongst both the expatriate and Spanish communities, having moved to Ronda 8 years ago, and married a Rondeño with whom she has two children. Charlotte learned Spanish at the School for Extranjeros (PIEE) and met her husband Jaime there, he was her teacher.

Last year Charlotte was selected amongst a handful of extranjeros in Andalucía to be featured on the show ‘Extranjeros en Andalucía’ hosted by one of Spain’s most popular TV presenters Pilar Rubio. However Charlotte says her proudest achievement is being a mum to Danielle and Santiago, and whose future is the reason she entered politics as a member of Ronda’s PSOE party.

In her new role as councillor Charlotte will be responsible for improving the integration efforts of the Ayuntamiento, between Rondeños and extranjeros, a process Charlotte describes as a two way project, helping extranjeros to understand Spanish bureaucracy and feel comfortable filling in forms, and at the same time encourage the learning of Spanish.

The approach sounds simplistic, and when asked, Charlotte admitted at this stage she just doesn’t know how the office of extranjeros will eventually shape up, this is a new experiment in Ronda, though it has been successfully trialed in other cities such as Mijas, Coin, or Marbella.

Foreign residents in Ronda of all nationalities, including British, Irish, German, French, Moroccan, and Central and South American nationalities will all be given equal preference for services, so Charlotte is keen to point out that whilst she is originally English, the integration of other nationalities is also her responsibility.

We asked what the new office for extranjeros plans to do in its first few months, and realistically what it can achieve before the next election when the possibility of a change of local government to the PP or a PP/PA coalition is a distinct possibility, Charlotte stated that the PSOE fully intends to retain the office if re-elected so the mayor is keen to see the office develop regardless of possible political changes.

The first two objectives of the office will be a survey to determine the needs of extranjeros of all nationalities, whilst the second priority is the compilation of a guide for extranjeros relating to essential services which it is hoped will be available in English and Spanish.

Regular readers of Ronda Today will know we have campaigned quietly within the Ayuntamiento for an office of foreigners, so Charlotte’s appointment is an exciting development, though of course foreign residents share some responsibility for helping to push for extra services such as original language films in local cinemas, cultural events for foreigners, and translation of essential information into the most common foreign resident languages.

Regarding the commerce portfolio, we asked Charlotte to explain her role, however this is more difficult for her because the role is clearly not perfectly understood within council crossing over several delegations as it does. This aside, the commerce delegation seems to have at its heart the growth of the central commercial district of Ronda, which at this stage primarily seems to be the promotion of Calle La Bola as Ronda’s main shopping street.

It seems moot to point out that Calle La Bola is Ronda’s only shopping street, and Charlotte is quick to point out that obvious observations aside, there is much work to do supporting the retailers of the central commercial district, and one plan calls for promotion of the street outside of Ronda, whilst her initial discussion with retailers suggests some would be receptive to council funded training of staff to improve customer care.

Time will tell if the new office for extranjeros and commerce will have time to be effective before the next municipal elections, and we’d be interested to know how PP or PA intend to handle extranjero integration, but as several Rondeños and long term foreign residents have pointed out, if the extranjero community doesn’t get behind the new office nothing will be achieved.

Ronda Today will continue campaigning for recognition from all political parties of the need for a strong office of extranjeros, and in the interim we ask that all our readers, both foreign resident and Rondeño please contact Charlotte with ideas or questions.