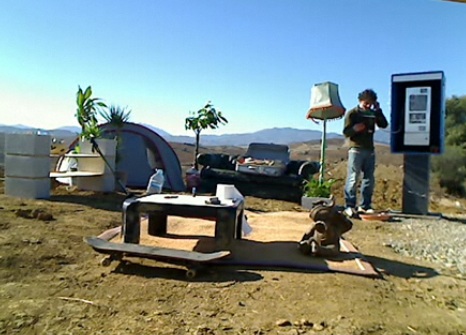 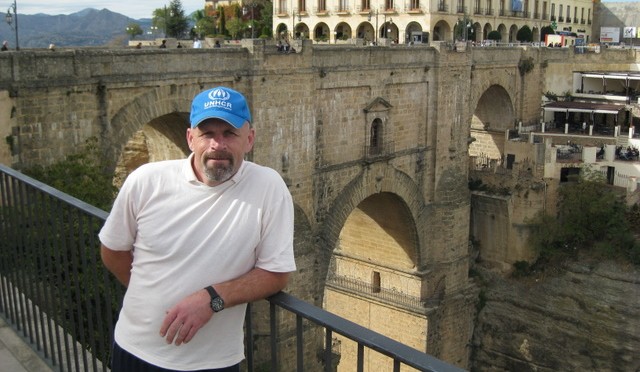 The 28th November 2009 was an exciting day for the under thirteen Union Deportivo Ronda football team as they were treated to a visit by Bjorn Heidenstrom, former Norwegian International and first division football player who is cycling from Norway to South Africa collecting signed football shirts, and raising awareness for the world’s 45 million refugees.

Bjorn has been cycling for six months already, and arrived in Ronda at 10am after a grueling cycle up the San Pedro highway from Marbella. He certainly lived up the nickname “Crazy Norwegian”. His day in Ronda is part of an extended trip that sees him cycle to Córdoba, then Madrid, and Barcelona before catching a ferry to Italy, the Balkan nations, Greece, Turkey, and Syria.

A decision then needs to be made on the route Bjorn will take cycling to Egypt before cyclng to Cape Town via Sudan, Kenya, Tanzania, and the Southern African countries. Bjorn is hoping to be in Johannesburg in May. Then he and some volunteers will stitch all of the shirts collected together into a single large flag that FIFA and the South African Football Association have agreed will be flown at the opening game of the Soccer World Cup in June 2010.

Football shirts collected from CD Ronda and UD Ronda will be amongst the other many hundreds of signed football shirts, including those from FC Barcelona, Real Madrid, FC Valencia, Manchester United, Liverpool FC, Dynamo Moscow, and many more top teams yet to be visited.

Refugees are one of the world’s greatest tragedies, and are a group of people with the least ability to represent themselves, with the overwhelming majority forced into camps for displaced people, or taken into care by charitable groups. Refugees don’t have the ability to work to make a living, they aren’t able to provide for their families, and they exist in a sort of half legal half outcast situation.

Ronda Today is proud to be one of the many supporters and sponsors of Bjorn Heidenstrom as he cycles from Norway to South Africa to give the world’s many refugees a voice. His approach is proving successful, over 50 million people have watched Bjorn’s travels on television or in his YouTube channel, and sponsors are lining up to offer funds to the Refugee Council and UNHCR.

With Bjorn’s enthusiasm and our support we can make a difference, and we can put the plight of refugees firmly where it belongs, in the news and in front of prime ministers and presidents of the world’s family of nations.

So, what happens now? Bjorn is on his way, and the plight of refugees could be forgotten now that we’ve had our fun. But Ronda Today cannot let this happen. We’ll be following Bjorn’s travels as he makes his way to South Africa, and we’ll be helping to organise workshops and fund raising activities to let Bjorn and the Refugee Council know that Rondeños want to help make a difference. Please join us. Send us an email (admin@rondatoday.com) and tell us if you can help Bjorn collect signed football shirts, or if you’d like write Bjorn a message of support.

We’re not asking for money, we’ll find sponsors for that, what we are asking for is your good wishes. You can read about Bjorn’s travels directly on his website, theshirt2010.net, or follow him on Twitter, @heidenstrom.

Here’s a selection of photos taken of Bjorn in Ronda.

Ronda Tortugas Rugby Club are a new addition to the sporting fraternity in Ronda, and what a start they’re making. This weekend they took on an invitational side from Yatton RC, a league club in England, and what a game it was. At full time the score stood 46-10 to the Tortugas, a fantastic effort for a young 3rd division team.

END_OF_DOCUMENT_TOKEN_TO_BE_REPLACED

Tourism in Spain accounts for 12% of GDP, and in Ronda is a huge industry drawing millions of visitors every year. Excellence within the tourism industry is therefore encouraged locally, and in recent years has seen a huge increase in support from both the Ayuntamiento and APYMER.

The event was well attended, and an air of excitement prevailed, although I’m sure the award winners must have been feeling quite nervous as they waited for the call to the stage to collect their trophies.<!–more–>The mayor of Ronda Antonio María Marín Lara, the councillor for tourism María Isabel Morales Oballe, and APYMER Tourism Representative Teresa Montero Verdú officiated.

Winners in 2009 for tourism were;
Real Maestranza de Caballería de Ronda for their immeasurable efforts in promoting cultural, tourist, educational, and heritage activities.

CIT (Centre for Rural Tourism) for their long years of promoting tourism in the Serranía.

Restaurant Jerez, for excellence in gastronomy, service, and a long history of actively supporting tourism in Ronda.

Juan Manuel Medina, for tourism innovation, in particular for donating his time in producing a guide to Ronda and the monuments in Braille for blind people.

This year’s award winners are well deserved, and it is believed they will all be positive role models for other tourism providers in Ronda, with the additional hope that 2010 will be tough to decide winners.