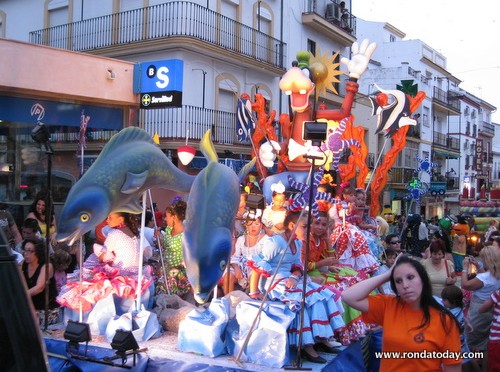 The Pedro Romero Feria in Ronda is the biggest carnival event in Ronda’s social calendar, a week of partying, of live shows, of fairground rides and attractions, and of course culminating in the Corrida Goyesca, the only bullfight to occur in Ronda’s famous Plaza de Toros.

Wednesday the 2nd of September 2009 was a special day, this was the day of the feria parade, a 3 hour extravaganza that departed from Alameda and the Plaza de Toros, and then snaked it’s way up La Bola, onto Avenida de Málaga, before turning down into the fair grounds near the hospital.

Carnival atmosphere reigned in Ronda, well before the parade began balloon sellers were offering large silver balloons in the shape of animals, aeroplanes and other things for 5€, and woe betide any child who let go, the balloon quickly ascended, and reached the heavens, never to be seen again.

2009 was my first year seeing the parade, though I’ve seen other parades in bigger cities in the UK, Germany, the USA, but little Ronda put on a show worthy of the biggest of cities. One can only speculate at the amount of money invested in giving Rondeños such a spectacle, but it was worth it. Despite the gloomy economy, on parade day everyone wore a smile.

Just as the sun set over Ronda the parade reached Avenida de Málaga, a great shout rang around the crowd who had been waiting for an hour or more, and then the first sign that something was happening. The Policia Local quickly cleared the road of balloon and sweet sellers, and leading the parade, a group of riders on horseback, looking resplendent in period costume from the late 18th century.

It wasn’t long till the great big animals, Tigger the Tiger, and his Disney friends appeared along with 100 children in colourful outfits, then dancers, acrobats, larger than life insects that attacked the crowd, Ronda’s brass bands, and too many other floats to mention.

At last, the moment everyone had been waiting the longest for, the Goyesca Ladies on their float that looked like the Palace of Versaille on wheels, the President atop her thrown, and the other dames waving from balconies below her.

What a parade! Incredible effort must have been expended, and all this in a small town in Southern Spain. 2010 will be a must see parade, and if you have the chance to book a hotel room in anticipation of being in Ronda for the feria, do it now, there is not time to waste. 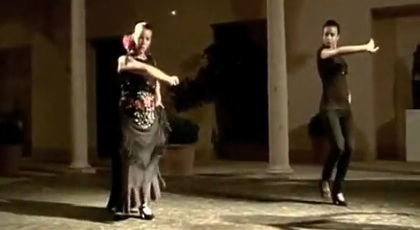