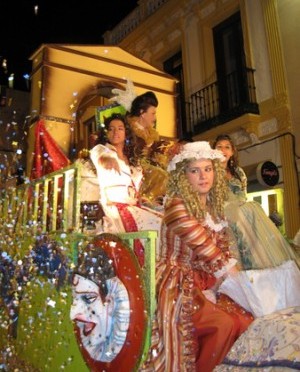 Last Saturday saw Rondeños come out into the streets in their thousands for the annual Carnaval procession (cabalgata) which this year snaked it’s way from the top of La Bola to the Plaza de Toros.

Carnaval in Ronda is a small affair due to the Pedro Romero Feria being the big event in our fair city, though the people of Ronda still make a decent effort to showcase their love of having fun.

The cabalgata consisted of several floats towed by 4wd vehicles, including last year’s Goyesca Dames who parodied their formal attire with home-made gowns and extravagant moves to the great amusement of the crowd.

High school students also took part, with a great selection of clowns, cross-dressing footballers and their cheerleading squad, or babies sucking dummies. As well, several employee groups joined the festivities with political messages about how the economic crisis is affecting their livelihood.

But perhaps the highlight, at least for Rondeños watching the procession, was the musical act “Entre los Flores”, who this year became the first Rondeño act in living memory to reach the semi-finals at the Falla theatre in Cadíz, the home of Spanish carnaval. Whilst the Rondeños didn’t win in Cadíz, they certainly did in Ronda, with a crowd that couldn’t get enough.