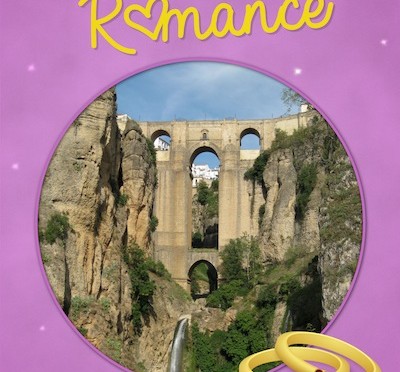 Ronda and the Serranía form the backdrop Michelle Cameron’s romantic comedy, “Emily’s Ronda Romance”. The story is an hilarious tale of a British couple who arrive in Spain after winning a Valentine weekend as second prize. First prize would have been a diamond engagement ring.

Emily wanted the first prize, she’s always wanted to be engaged. She’ll settle for two days in Spain, but after all that happens to them, she doubts their relationship will continue, despite all her scheming and planning to make sure Brian pops the question anyway. Spain can do that.

This is a story written in the mind of Emily, so we aren’t just entertained by their dialog. We also get to hear Emily’s thoughts. Her view of the world is sweet, funny, scary, and if Brian could read her mind, he’d run for the hills.

We are first introduced to Emily when she meets her boyfriend, Brian, as she signs the radio competition form. Almost immediately, she knocks him unconscious, slaps him, then falls in love with him.

From the airport in Malaga, to the apartment buildings as she enters Ronda, the plazas, the architecture, and then their excursion around the white villages, we are amused with Emily’s thoughts. At times she is disappointed, but most of her thoughts, are filled with interest and wonder.

During their holiday Emily gets a giggle from Brian’s misfortune as he stumbles through bad Spanish. False cognates are the bane of his trip, and sources of endless amusement for Emily. But don’t tell Brian she wanted a saddle to ride him up the steep cobbled streets of Ronda. Actually he does say he wants to read her mind. So, she tells him what she’s thinking. His silence speaks volumes. Emily’s mind is not for the meek.

Her mind daydreams of being an international fashion celeb, and Ronda is the perfect canvas for her photoshoots. She pictures herself as caesar at Acinipo, and wishes she could own a house in the countryside, and drive a convertible sports car with the wind in her hair. It’s amazing how much Ronda can change a person in two days.

As the reader, we are treated to in some moment, Emily’s scatter-brained thinking, her fleeting imagination, and her dreams as a woman. Unfortunately, her thoughts that should stay in her head, often exit from her lips, leading to several awkward moments.

Readers will of course recognise places and characters from the Ronda district, even though they are cleverly disguised to protect the (?) innocent. 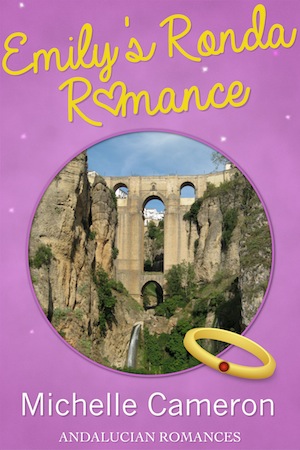