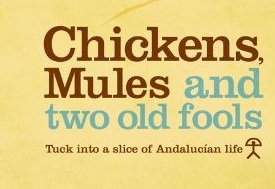 Awarded a Harper Collins ‘Gold Star’, and now a top selling author on Amazon, Victoria Twead writes a fantastically funny tale of five years living as reluctant chicken farmers in a small village in Almería in Southern Spain. The Alpujarra mountains seem to bring out the best in visitors, but are hell on new arrivals hoping to start a new life in Spain.

The story begins as poor, long-suffering Joe, Vicky’s husband, is looking forward to a peaceful retirement in the UK. Vicky has other plans and drops the bombshell that she wants to uproot to Spain. Vicky is a list-maker, even nicknamed ‘Schindler’ at work, and presents Joe with the following pitch:

Joe is far from impressed, and retaliates with his own list:

However, after much nagging, Joe caves in, but only on the condition that they will move for just five years.

They find their new home in a tiny village tucked away in the romantic Alpujarra mountains. Actually, the house is a crumbling ruin, but Vicky is still sure they’ve made the right decision. The Alpujarra is a rustic and quite conservative part of Southern Spain, very few of the locals speak English, and the couple have no idea of the culture shock in store.

Of course a glimpse of British television documentaries from the time would be enough to convince anyone that paradise awaited; happy couples in white-washed houses, long sunny days, and cool cocktails at sunset. Indeed this was what Vicky had in mind until moving day when their removal truck arrived, knocking over a lamp-post and destroying the village fountain. Hopes of a dignified beginning are quickly dashed. Talk about making an entrance! This was definitely not part of Vicky’s Five Year Plan.

“Chickens, Mules and Two Old Fools” is an hilarious rib-splitting read from beginning to end. We are introduced to village characters, both animal and human, ache for the trials endured by poor Joe, and find ourselves laughing on every page wishing the end wouldn’t come quite so soon. We meet characters such as Mother, a spliff-smoking 85 year old sex-kitten, and her daughter Judith, a slightly too large and exceptionally generous woman who keeps ten dogs. ‘That one’s called “Half”, dear. Always said we’d never have ten dogs, so now we have nine and a “Half”.’

We are introduced to Vicky’s sister and husband-in-law, the Eco-Warriors, whose antics certainly leave an impression, the riotous Gin Twins, and of course we can’t forget the most dangerous cockerel in Spain and the chickens and mules that torment Vicky and Joe. As for selling eggs to the villagers, that plan was never going to run smoothly!

But that’s not all. Woven into the story are a number Spanish recipes given to Vicky by characters in the book and the village ladies. No wonder HarperCollins described the book as ‘charming’ as well as ‘hilarious’ and ‘laugh-out-loud funny’. If you liked Chris Stewart’s “Driving over Lemons”, you won’t regret reading Victoria Twead’s “Chickens, Mules and Two Old Fools”. Take it from me, this is one paperback that should be on every expat’s bookshelf and I know people will be talking about B*gger and F*ck, two of Vicky’s hens for years to come.

Says Victoria, “As I wrote, the book made me laugh and cry. When, reluctantly, I showed it to other people, I was astonished to see them react the same way. One may easily imagine my delight when ‘Chickens’ was awarded the HarperCollins Authonomy ‘Gold Star’, and is still today the only non-fiction book to claim that distinction.”

Buy the book from Amazon UK