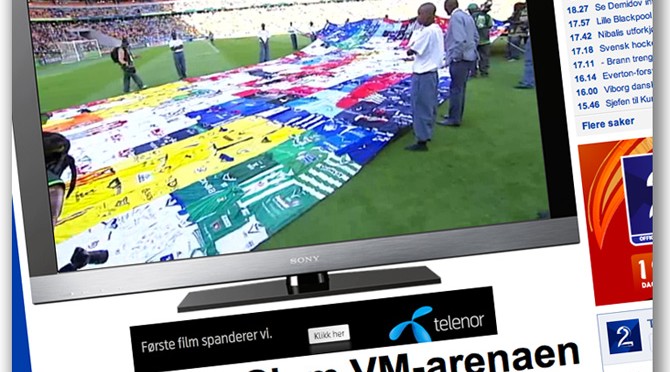 After 335 days on the road, cycling from Oslo in Norway, via Ronda, and to Johannesburg in South Africa, Bjorn Heidenstrom, the crazy Norwegian cyclist has finally had his dream come true, seeing all of the football shirts he collected turned into a giant flag which will be flown at the opening game of the 2010 FIFA World Cup.

Bjorn arrived in South Africa from Botswana on May 20th 2010, and made his way to Johannesburg, arriving yesterday just in time for the official opening of the biggest of the new stadiums being built to host the World Cup, and only moments before South Africa’s President Zuma arrived to inspect stadium, and sign Bjorn’s flag.

The Shirt 2010 is a massive yet solo project to raise awareness for the world’s many millions of refugees, over 45 million according to United Nations estimates, people who have been forced out of the homes by war, famine, and natural disasters, but are sadly forgotten.

While he was in Ronda, Bjorn was keen to stress that his project is not about a European footballer having a good time, Bjorn proudly wore a UNHCR cap and emphasised that his mission isn’t to raise funds, his goal was simply to make people think about the world’s refugees, and then to tell their friends about these people, brothers, sisters, mothers, fathers, sons and daughters, just like us, but who are forced to live without security, and perhaps without clean water or shelter.

Known during his footballing days as ‘Heiden’, Bjorn passed through Ronda in late November 2009 and was greeted by the councillor for sport, Carlos Mirasol, and the children’s football league UD Ronda. Bjorn was presented with a CD Ronda and UD Ronda shirt, both of which have now been included in the world record breaking shirt (pictured above).

It is not too late to support Bjorn, he will be raising awareness for refugees throughout the FIFA World Cup, you can read more about his travels on the official ‘The Shirt 2010‘ website, or if you have a football shirt you’d like to donate to Bjorn’s campaign, please contact Ronda Today and we’ll make sure it gets to Bjorn.