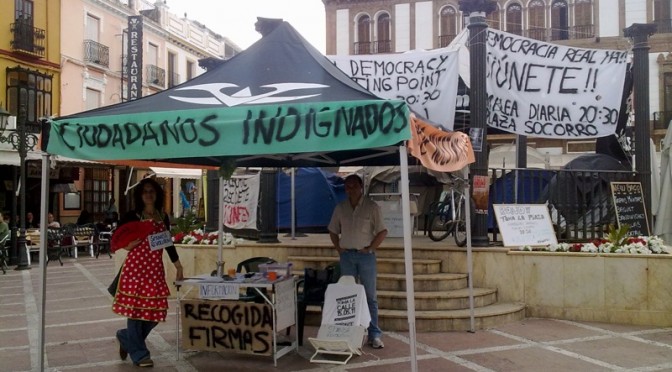 Entering Plaza del Socorro in Ronda many would be forgiven for wondering if they’d walked into a hippy convention with the central rotunda taken over by tents, hand written banners, and people milling around disturbing the general peace of the square.

Known as los indignados, groups have formed throughout Spain with one basic message upon which they all agree even through they appear to come from all sides of the political spectrum. Specifically, their manifesto calls for the end of a political system that encourages accumulation of wealth in the hands of a few, and is instead replaced by a system where politicians think first of the welfare of society.

The uprisings in the Arab world, and a shared youth unemployment rate, currently estimated as 45% in Spain, has been the impetus for young people to take to the streets in their thousands, and camp out in main sqaures or in front of government buildings.

Ronda’s Plaza del Socorro is no different, with scores of people regularly chanting slogans and calling on townsfolk to sign their petitions demanding an end to corruption and reform of the political system, specifically to ensure Spain’s democratic future is more representative of the will of the people.

Speaking to Ana, a representative of the group in Ronda, this writer discerned an element of revolutionery fervor gripping the core group of sit-in regulars. However the petition just one week after being opened to signatures has already attracted over 1500 signatories in Ronda, this from an official population in the city of 38,000 residents, suggesting the wider community may in fact be sympathetic to their aims.

Strength of feeling against corruption that affects every family does not seem to be isolated to the young, indeed many who have signed the petition remember Spain’s first steps to democracy after the death of General Franco, and expressed disillusionment to Ronda Today that the dream of a better Spain has in some ways not materialised.

The recent local government elections in Spain certainly overturned the status quo, with Ronda returning to the Partido Popular (PP) albeit in a power sharing agreement with the Partido Andalucista (PA), though with the city’s finances in a poor state the change is unlikely to bring major reforms.

A small sample of younger people in Ronda that were spoken to by Ronda Today, both employed and unemployed, seemed in general to mirror the disillusionment of the protesters in Plaza del Socorro and with a national general election thought to be likely before the end of the year, it doesn’t seem the protesters are in a mood to go home yet.