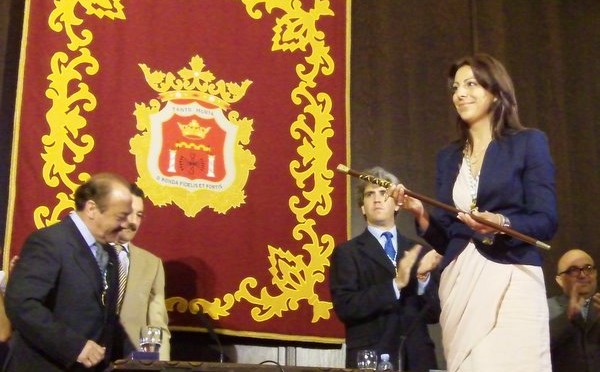 After a bitterly fought local election between PSOE under the leadership of Antonio Marin Lara, PP under Mari-Paz Fernandez, and third choice PA under Isabel Barriga, today witnessed the official swearing in of Ms Fernandez as Ronda’s next mayor, and the unveiling of her team, including the PA’s Barriga as deputy mayor.

The Santo Domingo convent was the setting for the inauguration, which began with all list representatives from the parties being called to the stage, followed by a secret ballot of all councillors for the role of mayor. Fernandez attracted 12 votes reinforcing her control of the 7 PP councillors, and the strength of the pact with PA for their 5 votes.

Antonio Marin Lara, current leader of PSOE in Ronda however only attracted 6 votes out of the 7 he should have received. Several PSOE militants speculated to Ronda Today that Francisco Cañestro might have been the rogue vote to demonstrate his independence as he takes on a role as representative from Ronda in the diputacion de Malaga, whilst others were unsure and recalled that Marin Lara has recently become embroiled in allegations of an extra-marital affair with a younger blonde woman and that wondered if his own wife voted against him.

This was an election overshadowed by allegations of poor governance by the incumbent PSOE both locally and at national level, the emergence of a people’s protest movement ‘Los Indignados’, and the rebirth of the Partido Andalucista in Andalucia, though it is impossible to say if the protests had much impact on the outcome of the election as polls prior had projected a PP win.

PA failed to reach their potential in the region, though in Ronda the party polled an acceptable 5 seats from 21, giving them kingmaker status as PSOE and PP each captured 7 seats and vied for PA support in a coalition, and resulting in today’s inauguration of Fernandez after protracted negotiations between the parties eventually producing a pact allowing PP to rule with minor concessions to PA.

During the swearing in ceremony and first extraordinary plenum of the new council, a packed hall in the Santa Domingo Convent witnessed all party leaders speaking of their goals, and surprisingly Izquierda Unida’s representative received the loudest applause when promising to campaign for basic necessities such as free wifi Internet throughout the city and food on the tables of destitute families.

PSOE’s Marin Lara was worst affected by the crowd with a large section booing his speech and calling ‘fuera’ and ‘burro’ which left Marin Lara flustered at first with obvious signs of being close to tears, and then as he warmed up more belligerent whilst accusing his political rivals of being accessories to allegations brought against him. Francisco Cañestro, deputy leader of PSOE and several former PSOE councillors appeared uncomfortable at Marin Lara’s outburst.

Both Fernandez and Barriga have distanced themselves from dirty politics promising to sweep away many of the negative perceptions about Ronda, and with both being first time entrants into senior political office at the local level will enjoy a honeymoon period to prove their credentials.

The inauguration ended to loud applause as Fernandez took the podium, setting out her goals for the next four years including her promise to start a thorough audit of council finances and move forward with the PP proposed motorway linking Ronda and Antequera, the intention to get Ronda’s defunct urban plan approved, and her commitment to ensuring Ronda successfully wins UNESCO World Heritage status.

She reiterated comments made by PA and other PP councillors in calling for a fairer more just society, and called on Rondeños of all nationalities to describe themselves as ‘de Ronda’.