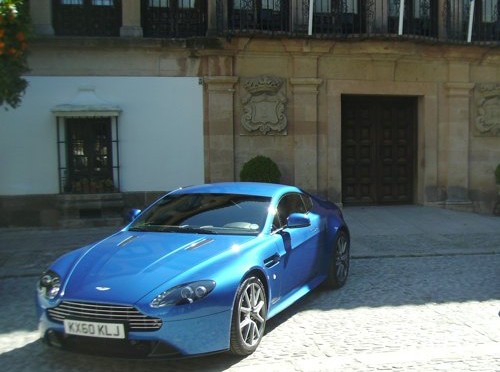 Aston Martin, the prestigious UK-based sport car manufacturer today presented their 2011 range of vehicles to over 300 international motoring journalists, most of whom also had the chance to test drive the models at Ronda’s Ascari Race Resort.

News of the event first filtered through when company representatives approached Ascari and the Ronda town hall in early November 2010 for a special request to host meetings of the journalists in the Casa del Gigante (House of the Giant). Pepa Becerra, councillor for culture in Ronda told Ronda Today she didn’t have to think very hard in approving the request given the power of the brand after the most recent James Bond film featured Aston Martin as the Bond car.

Ronda narrowly beat Sevilla for rights to host the launch, mainly due to the tranquil setting of the Plaza Duquesa de Parcent which is now a no parking zone and offers wonderful photo oppotunities for the vehicles in front of the historic town hall, the Santa Maria church, and next to the trees of the plaza.

At least six models including a convertible were on display for visiting journalists, however race day was a private event with no opportunity for Rondeños to see the cars. Today’s events in Plaza Duquesa de Parcent had been eagerly anticipated and drew in several hundred tourists and motoring enthusiasts to get their photos taken with the vehicles.